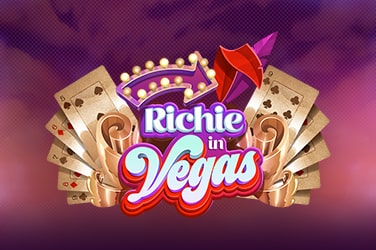 Players will certainly feel as though they have been taken to Las Vegas in this Irondog Studios game, as this Richie in Vegas online slot game features a number of different visuals and graphics that can be associated with the bright lights that Sin City has on offer.

The first thing that bettors will notice is the purple background that features a number of objects that have been decorated via the use of neon lights, whilst there are playing cards and other items that can closely represent Vegas.

In regards to the paytable of this Richie in Vegas online slot game, there are a number of icons that can be found. These include things such as various red dice, colourful 7’s, poker chips and golden bells.

Furthermore, Richie will also appear on the playing grid, as he is depicted as an individual who is in a red shirt and a red baseball hat with a thumbs-up action having been provided. Furthermore, there is a guy who is wearing a tuxedo, but watch out for him in the Richie in Vegas bonus features section!

This Richie in Vegas online slot game is played on a grid that consists of a total of 5 reels and 3 rows and features a total of 20 paylines that are fixed for each spin that is taken by Las Vegas Casino players.

The game can be adjusted to suit players needs, as there are various settings that can be customised and adjusted.

There are a number of great Richie in Vegas bonus features available for players to try and trigger in this online slot game!

The first is via the wild icon, which appears as a golden sign that looks like any that would appear above a physical casino in Sin City, and this can help with forming additional wins. Players can use this to substitute for all regular icons on the paytable.

There is a second wild that is available in this game, as well, which has the ability to appear at the top of a reel and expand to cover any of the reels that it does appear on fully.

The Wheel of Chance bonus feature can happen on any spin, and this will fill the screen with 10 different segments that are vibrant in colour. Players will need to spin the wheel to try and win a prize from it.

The prizes that are available on this wheel include cash prizes of up to 8x the bet, expanding wilds or the ability to enter the free spins bonus! After a prize has been awarded, the wheel will turn into a wild which could potential provide players with further rewards!

The free spins bonus game will provide players with 6 free spins, to begin with, where they will see special Wheels of Chance appear on each spin. Once again, there are a number of prizes available to win, such as more free spins, expanding wilds and cash rewards. In addition, they can also activate the VIP Wheel which will provide bigger prizes.

This wheel will see the top prizes available in this Richie in Vegas online slot game be on offer, with up to 50x the stake on offer, as well as 8 wilds, 3 expanding wilds and a number of extra free spins.

Players who land the tuxedo-wearing character will be able to win the jackpot of 2,000x the bet when he lands in five positions during the free game round.

The return to player (RTP) rate for this Richie in Vegas online video slot game stands at 96.24%, which has to be considered rather generous when a medium volatility level has been provided, as well.

Irondog Studios have allowed players to make a minimum bet of €/£/$0.20 per spin, whereas Las Vegas Casino players can place a maximum bet of €/£/$50 on each spin that they make.

With so many different bonus features available in this Richie in Vegas online slot game, the potential to win some grand prizes is available, with bettors able to enjoy a brilliant game experience as they spin away, as well.

Whether it be the free spins game, the expanding wilds, or the special wheels, players will be hoping they can enjoy Sin City and everything it has to offer in this online slot from Irondog Studios!