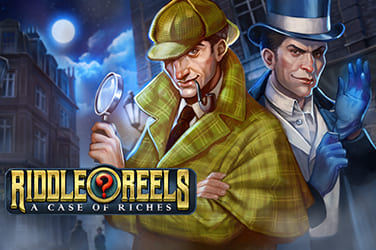 This Riddle Reels: A Case of Riches slot game provides bettors with the chance to obtain free spins, transforming symbols and a mystery bonus round!

Riddle Reels: A Case of Riches slot game is a title from Play’n GO that will see players go on a mystery hunt as they look to help Sherlock Holmes out with finding out the answers he needs.

The game is set in a London street as bettors will be able to identify a number of different establishments, including the pub. The visuals have been drawn expertly and provide an immersive experience.

In addition to the game’s background, the symbols available on the paytable have each been designed with the highest level of detail, as well. These include the various weapons that are on offer and four different picture cards that each represent a classic character from the stories told.

The playing grid provided by Play’n GO in this Riddle Reels: A Case of Riches slot consists of a 3×3 formation, thus giving Las Vegas Casino bettors the chance to have a rather simple gameplay experience.

In addition to the small grid, there is a total of 9 different paylines, with each of these fixed with each spin that is taken when playing this game.

There are a host of different Riddle Reels: A Case of Riches bonus features available to explore and trigger in this game.

The first of these Riddle Reels: A Case of Riches bonuses is via the game’s wild icon, which also happens to be the most valuable. This icon can appear as a wild multiplier and offer up to 324x the bet. If more than one wild multiplier appears on the grid on the same spin, then they can be added together and combined.

However, the main Riddle Reels: A Case of Riches bonus feature is the free spins bonus game that can be triggered when three scatter icons appear on a single spin. Those who are unfortunate enough to land two will get a respin to try and land the final third, but if they do not achieve it on that spin, then they will get the opportunity to play the Mystery Bonus round.

This will see scatters expand on their reels and either reveal a character or a weapon, thus leading to a consolation prize.

Las Vegas Casino bettors who are able to trigger the bonus game will be entered into a board game where they will then get four rolls of the dice and to try and navigate the 14 spaces that are available. Each space will have a clue on each one, with players able to collect different modifiers if they collect the clues. These include:

Once the dice have been rolled, players will move along the reels and pick up a clue that has specific instructions on them. Generally, a task will be to land a win and if it is completed successfully, then the clue metre will be charged.

If this does not get fully charged, the Clue Points wheel will be shown, which will depict a blue space that has the number of clues collected. Once spun, if it lands on the blue space, it will take players to the Mega Spin, where they will be met with one wild reel and two other reels that feature just one suspect or one weapon. Once this happens, the free spins bonus will be retriggered.

The return to player (RTP) rate for this Riddle Reels: A Case of Riches slot is 96.22% and comes with a medium volatility level.

An exceptional slot game, Play’n GO’s Riddle Reels: A Case of Riches will certainly leave bettors feeling wealthy if they are able to crack the case and trigger the bonus features that can be found in this excellent title!