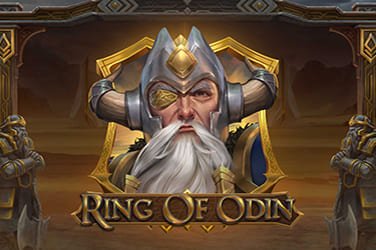 Playn’Go’s portfolio of online slot machine games based on ancient mythology has Ring of Odin at its forefront. The Lore behind Norse mythology has become increasingly popular, and the developers do a solid job in portraying their essence. And what better way to do so by putting the king of Valhalla himself at the center of it.

Ring of Odin is a 5 reel, 3 row and 20 payline game. The slot game’s features include excellent multiplier based free spins. Overall, it is a well-balanced video slot suitable for a wide variety of online casino players.

Ring of Odin is undoubtedly one of PlayNGo’s better designs. Though some of the graphics in the background are rather static, the animations are quite pleasant to watch. In addition, the imagery in the slot game is on point, as almost all the visuals tend to highlight the overwhelming power of Odin.

The design of the AllFather is, furthermore, quite royal and commands attention. The player feels an added sense of joy whenever they stumble upon the wild Odin. Finally, the colour palette of the game in contrast to a desert backdrop makes the player feel like the slot game is based in an otherworldly plane of existence.

The betting range of Ring of Odin is between 0.10 and 100 credits. This is fairly broad making it accessible for budget players and high-rollers alike. The objective of this video slot is to create 3 or more combinations of similar symbols in order to yield payouts. Note that these combinations must be from left to right.

The Wild symbol in the game is Odin himself. It has the ability to replace any other symbol on a reel helping the player win more favourable payouts.

In addition, Odin’s ring can trigger respins in several ways . For instance, the number of symbols that land on Odin’s ring will be the number of free spins that are granted to the slot game player. The scatter of this video slot is Odin’s eye that triggers free spins. This feature starts at 4 free spins and is triggered when 3 scatter symbols land of reels 1,3 and 5.

Finally, if Odin’s ring appears on screen in conjunction with the scatter, the multiplier free spins feature is activated. The multiplier can go up to 9x and will be active for the duration of the entire round.

Note that volatility of Ring of Odin online slot is between medium and high.

With a fan favorite theme combined with excellent features and a solid RTP, Ring of Odin has a strong replay value. Its smooth gameplay experience is suited for all types of players. Try amazing online slots like this at Las Vegas Casino .com