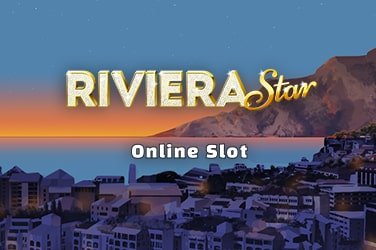 Fantasma games paint a wonderful picture of a weekend at the casino to its audience. It revolves around a suspicious group of friends who arrive at the Riviera with a mission. Riviera Star slot game is a sophisticated online slot with 5 reels, 3 rows and 20 paylines With some exciting features and hefty payouts , this is a gaming experience you do not want to miss out on!

With interesting free spins and multiplier features, Riviera Star gives the player high winning variations whilst maintaining a healthy return to player. With an engaging outlook, Fantasma’s classy game execution has something for everyone.

The theme’s serious, adult nature is contrasted with its animations and color palette. This gives it a light-hearted feel as the design doesn’t overwhelm the player. And while the animations in Riviera Star game are quite basic, they succeed in immersing the player into a pleasant and calming gameplay experience.

This feeling is consistent with the game’s symbols. Some of these include champagne, expensive watches, gold rings etc. Our characters are desperate to make it in the casino by hook or crook.

The betting range of Riviera Star is between 0.20 to 100 credits. This is fairly broad and is thus, accommodative of budgets players and high rollers alike. In addition, the user interface of the Riviera Star is intuitive to understand and easy to navigate. It runs without fault on all devices.

The objective of Riviera Star online slot is to create combinations of similar symbols adjacent to each other in order to yield payouts. Note that some symbols yield higher payouts than others. For instance, the status symbols don’t yield as much as the characters in the video slot game that yield up to 4x the original bet.

The promise of Riviera Star’s theme has its money where its mouth is with a whopping maximum payout of 1975.5x the player’s original stake. This can be achieved by combining the game’s standard gameplay with its features and bonuses.

The most commonly seen feature in Riviera Star slot game is its respin feature. Whenever the player has a winning combination, that combination gets frozen. The slot then respins until the player lands more combinations in their winning hand. This is followed by a payout.

In addition, Riviera Star online slot game has a fun Superstar feature which gets randomly activated. When activated, the player will see a golden start hovering over the grid and falling in grids 2,3 and 4 with a starting multiplier of 1x.The multiplier increases by one every time the player gets a winning combination or lands a wild.

Finally, the scatter in the game is the black and gold chip. If landed , it can land up to 10 free spins.

The Return to Player (RTP) of Riviera Star is 96.26%. This means that theoretically, a player wins an average of €96 for every €100 bet made, Note that this average is a cumulative of over 4000 attempts.

With a sophisticated design, healthy RTP and a potential to win big, Riviera Star provides a wonderfully immersive gaming experience and has a high replay value.