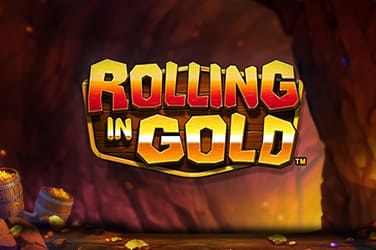 Rolling in Gold is a slot game by Blueprint launched on 04.03.2021. Blueprint is a significant source of gaming entertainment, with slot games available for various platforms. Play rolling gold slot games and many other online casino games at the Las Vegas Casino.

Rolling in Gold, Blueprint Gaming, is known for its high-quality visuals in online slot games, and it stands up to the hype, especially on mobile, where the symbols have a genuine golden gleam as you spin. Players will find themselves deep in a gold mine, complete with lighting and gold barrels.

Wooden borders surround the reels, and the low-value symbols are various colored jewels. Pickaxes, gold nuggets, gold carts, miner’s helmets, and a prospector with a very long beard are among the high-value emblems in this casino game. A country song plays in the background as you spin the reels, which amps up when the additional features are triggered. As you spin, you’ll also hear a miner guiding you through the online slot and encouraging you.

It’s simple to spin the reels of Rolling in Gold. In this online slot game, players may set their stake per spin using the bet button below the reels, then spin the reels with the white and black arrow spin buttons. The minimum bet for each spin is 10p, while the maximum bet is £10.
This online UK casino game has six reels, the first two of which are three rows high and the following four of which are four rows high. This gives players a whopping 2,304 different chances to win. A winning combination is formed when three or more matching symbols appear on a pay line, and it must begin on the first reel.

Rolling in Gold Symbols and Payouts

Blue, yellow, and red jewels and helmets, lights, and pickaxes can be found on the paytable. The donkey, a gold purse, and a gold wagon are next. The bearded worker is the highest-paying symbol in this casino game, with 6 of a kind worth 15 times your bet. Diamond sticks are the wild symbol, and they only show on the first two reels. Expect a hard-working culture in Australia, with opportunities to trigger and win huge rewards.

You’ll notice that the Rolling in Gold slot has a lot to offer during the game. You’ll take a risk on the Gold Spins triggered by Mystery Symbols and dynamite bricks. The Diamond Spins Bonus game, powered by the Hold and Win principles, has the most potential and is the key to earning a large payout. Let’s take a closer look at how these features operate:

TNT blocks, which are available during the base game, symbolize the mystery symbols. When they succeed in landing on the grid, all symbols on the reel screen turn into a randomly picked symbol.

In this online slot game, the wild symbol not only assists you in transforming the symbols on the grid but also activates the Gold Spins bonus. Nevertheless, the triggering symbols are formed differently in this case. This bonus is triggered by landing TNT wild symbols on the first two reels, and a golden nugget scatter symbol on the third reel.

This bonus game is played on a 4×4 grid, and any triggered gold nuggets from the main game are carried over. The online slot game begins with three spins, but if you manage to place additional nuggets on the reels, the round will be reset to three spins. If you run out of spins and cannot activate the Diamond Spins bonus game, the feature will stop, and a new payment will be produced, with the value of all nuggets in view being collected.

In this online UK casino game, you’ll be able to enter the Diamond Spins bonus game if you gather three diamond symbols during the Gold Spins. Even though it has a few distinct qualities, this feature is comparable to the preceding one. Diamonds do not reset the spin counter in this online slot since you only have three opportunities to spin the reels. A large diamond rotates on its own next to the 4×4 configuration, delivering a multiplier of up to 10x the value of the diamonds in view. The award you’ve won gets credited to your totals once you’ve finished playing with this function.

The theoretical return to player (RTP) of the Rolling in Gold slot game is 96.41 %. For a slot machine, that’s OK.

The Rolling in Gold slot game does a good job bringing out the mining idea. The aesthetics are well-made, and the audio is appropriate for the game’s subject. The Diamond Spins are unquestionably the highlight, and if you can unlock them, you’ll be in for a tremendous treat. When combined with the growing multiplier, they may turn a very mediocre game into a thrilling one. Getting there is not an easy task. The fight is worth it because the highest reward is 50,000x the bet. Try out the Rolling in Gold slot game at the Las Vegas Casino and have one of the best online slot games experience!