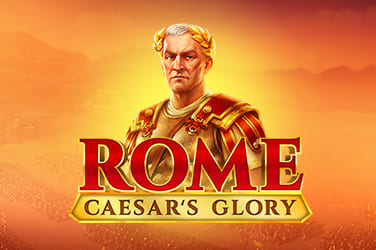 Free spins and a flipped playing grid are befitting of the Ancient Roman Emperor in this Rome: Caesars Glory slot game available at Las Vegas Casino.

Rome: Caesars Glory online slot game is a title from Playson that pays homage to the Emperor of Ancient Rome and comes with a theme that would be befitting of the powerful leader.

The game adopts a simple theme, but one that is highly effective as it shows an army in the background, with an orange-red colour scheme being applied. In addition, the symbols available on the paytable each help to amplify what the developers have tried to achieve with this game.

These icons consist of the standard royal playing cards, as well as helmets, swords, shields, a standard bearer, a legionnaire and Caesar, who also happens to be the game’s wild.

The playing grid of this Rome: Caesars Glory video slot is a little different to the traditional format that many developers typically follow, as Playson has provided Las Vegas Casino bettors with the chance to win from 64 different paylines.

This is made possible by the grid setup of 2-3-4-5-6-7, thus making 6 reels possible to spin and form winning combinations upon.

There are a couple of different Rome: Caesars Glory bonus features that players need to know about when playing this game at Las Vegas Casino.

The first of the Rome: Caesars Glory bonuses is the ‘Free Spins’ game, which will be triggered when three or more of the game’s scatters appear. Designed as eagles, players who land 3 of these will receive a total of 8 free spins, whilst 4 means 12 and 5 will see 16 free spins be awarded.

Furthermore, there is the possibility to retrigger the free spins feature by landing more icons, but the reels can also be flipped, thus making the playing grid appear in the formation of 7-6-5-4-3-2, thus making it a lot easier to potentially form a winning sequence. In addition, expanding wilds are available and these can fill the reel that they appear on.

There is another Rome: Caesars Glory bonus feature to know about in this slot, with it being known as the ‘Bonus Free Spins’ game. This is triggered by collecting a total of 275 stacked wilds (reels filled with wilds) and more free spins will be provided. This is easy to follow as there is a meter under the playing grid that highlights how many have been collected.

This Rome: Caesars Glory slot game has a return to player (RTP) rate of 96.23% and comes with a variance level that is considered to be very high.

Bettors at Las Vegas Casino will love what this Rome: Caesars Glory slot will provide them with, as it will feel as though it is befitting for them, let alone the former Emperor of Ancient Rome. The game provides a number of solid win opportunities, as well as some potentially lucrative prizes!