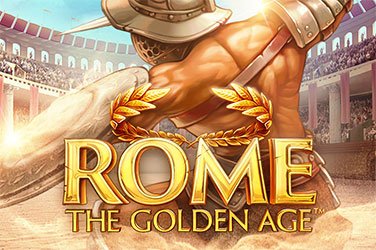 Las Vegas Casino players will be able to unleash their inner Gladiator when they play NetEnt’s Rome: The Golden Age online slot game as they can make the most of some great bonus features include a free spins multiplier, as well as an RTP rate of 96.06%.

Anybody that has played a NetEnt game will already know that they can expect a certain level of detail when it comes to the visuals and themes that have been provided and this Rome: The Golden Age online slot game is certainly no different, as they go on to meet the expectations that will have been had.

Rome: The Golden Age video slot players will find that they will feel as though they have been transported to an ancient Rome temple as there are two statues that are situated next to two Roman pillars with a marble floor, and red curtains that would not be out of place in a Roman film of some sort.

The icons Rome: The Golden Age online slot have also been provided with some rather great detail and with many of them having been expertly designed. There are a number of different symbols available on the paytable of Rome: The Golden Age slot game, with the traditional playing cards being found, as well as items from the gladiator era, such as the swords, the helmet, the ring, an eagle and a tiger. There is also a wild symbol and a scatter symbol.

The playing grid is easy to follow, although it does feature an uncommon set up, as there are 5 reels that can be spun that consist in a formation that features in a 3-4-5-4-3 shape.

Players are able to adjust a number of features at the bottom of the playing grid, with a number of different options available to use to customise their gameplay experiences.

One of the special bonus features available in this Rome: The Golden Age online slot game is via the icon that represents a coin with a picture of the Emperor and the words, the Golden Age on it. Anytime it appears, it will leave a gold frame behind and will add points to a meter that can be found above the reels, leaving two events to happen.

There is a frame that displays the word ‘Rome’ in bold red letters, and this will turn into a wild icon on the next spin and will feature the power of substitution. Frames that have wild in them will vanish on the next spin, but any that are not adjacent to affected symbols will stay in place.

The second of these bonuses will see a respins bonus round feature, if Rome: The Golden Age players are able to find three or more of these scatter icons. Slot players who are able to build up the meter before landing the three scatters will be in a better position, as the more points collected will allow for more free spins to take place.

Once the metre hits 200, it will increase a win multiplier, and this will continue to rise every time 200 points has been achieved without the free game being triggered. There is a second meter that will keep track of the current multiplier, and this will go from 1x all the way up to 1000x the bet. Rome: The Golden Age players who trigger this free game will see that the background will change to the gladiatorial fight in the Colosseum and they will get three respins of the reels with the coins locked in place.

Each new Rome symbol will transform into a coin with a win multiplier value and will reset the respin counter back to three. Rome: The Golden Age video slot will continue and reset to three every time a Rome symbol appears.

There is a return to player (RTP) rate of 96.06%, and this video slot has a medium to high volatility level attached to it.