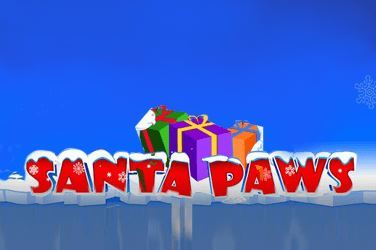 Christmas is perhaps the most popular theme among video slot developers, and Santa Paws is yet another game with this background, from the leading game developer Microgaming. This game can help bring Christmas cheer to you no matter what the time of the year is, with some fun and adorable characters, and some special features that can get the bells ringing for you.

A snow-filled background greets you when you start Santa Paws slot, with a cuddly polar bear at the top of the reels as well. The standard card symbols that are on the reels are all covered in snow as well, while the themed symbols include owls, seals, orcas, a polar bear dressing up a Christmas tree, and Santa Paws himself. This slot game has two Wild icons – Santa Paws and the orca, while a penguin carrying gifts is the Scatter. However, the orca is only active as a Wild during the free spins round.

Santa Paws is a five reel and 20 payline slot game, with players having the option to pick the number of active paylines before every spin. They can also choose to autoplay for a chosen number of spins, with the bet value being fixed beforehand. Santa Paws also has a Gamble option, where players can choose to wager their wins immediately upon receiving them, or instead simply collect the win. If they choose the gamble, they can either double or quadruple their win, or end up losing it entirely. Players will need to guess the colour of the next card to be drawn from a pile correctly to double their wins, while they will have to guess the suit correctly to quadruple them. This can be done for up to five correct guesses in a row, with an incorrect guess leading to the player losing all their wins and being taken back to the main game.

The Wild functions as usual and will substitute for all symbols except the Scatter, and it can also form winning combinations on its own if you land more than two on a payline.

While the theme and gameplay of Santa Paws are quite common and basic, the use of two Wilds is an interesting concept that does add a new dynamic to this video slot. This Las Vegas Casino video slot does what it says on the tin – it has solid visuals, solid gameplay, solid betting options and solid win potential, which overall makes it a solid game that should be fun to play for slot fans.