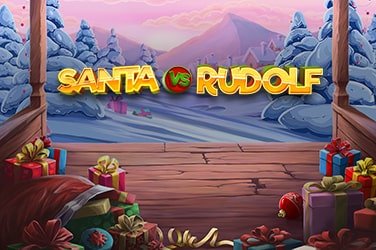 This is the time of year when Christmas-themed slots tend to perform well and one of the most successful in this genre is Santa v Rudolf slot game, produced by one of the world’s leading game developers, NetEnt, who have plenty of entries in the outstanding Las Vegas Casino roster of slots.

This slot title has a clear Christmas theme, although with a twist. In this video slot game, Rudolf has hidden Santa’s red hat before he is about to set off to deliver his presents around the planet.

The Santa vs Rudolf slot game is presented in cartoon graphics and has a cheerful soundtrack. It takes you right to the North Pole and both Santa and Rudolf are stationed on each side of the slot game reels. The Santa vs Rudolf slot game’s symbols used here include card values A, K, Q, J and 10, realised in candy cane style. In addition, you will see letters addressed to Santa, snow globes, leather reindeer collars, huge sacks of gifts along with Santa’s famous sleigh. The slot game’s sleigh symbol pays out the biggest prize, of up to 25 times your stake.

There are two Wild symbols in this video slot game. The Rudolf Wild appears on the first reel in the basic game and moves one reel to the right at the start of every spin. The Santa Wild you will only see on the fifth reel, and it moves one reel to the left with each spin. This moving Wild feature from Santa vs Rudolf slot game is called a Wild Respin bonus, with both Wilds functioning as walking Wilds.

If you find both slot game Wilds in the same place on the reels, they join together and merge. This will lead to the Free Spins feature, which offers 10 spins. In fact, if you merge three of the Rudolf and Santa symbols, you can land 30 Free Spins. In addition, there are two meters over the slot game reels. These match the game’s Wilds that are used in the feature. If a Santa or Rudolf Wild moves from the meter, it fills one level on the meter. Both Santa vs Rudolf slot game meters include 8 spaces and if you can fill a meter completely before you get to the end of the feature, a bonus feature will be triggered.

The Rudolf feature gives you 3 Free Spins in which there are 5 Reindeer Wilds placed at random on the reels. The Santa feature of the Santa vs Rudolf video slot game gives you five items to click on, each of which will reveal a prize. These can include a multiplier or a cash prize. The multiplier increase can lead to a boost of up to x4 applied to your winnings.

This is a pleasing game to play and, as a medium variance slot, Santa vs Rudolf offers something for everyone, including a maximum return of x1000 your stake. We were also pleased to see the relatively high RTP of 96.35% of this slot game which is one of the better RTPs you will come across. The base game of Santa vs Rudolf slot is nicely realised and quirky, but it is with the plentiful bonuses that this game really shines.

At Las Vegas Casino our focus is to provide you with the best online casino games from the most sought-after game providers available just like Santa vs Rudolf slot game.