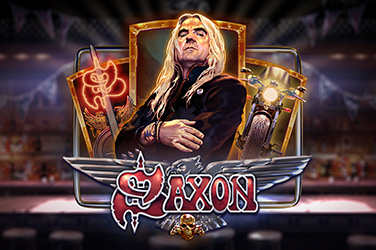 Play’n Go has a solid history of being able to provide bettors with a strong rock band-inspired slot game, so it is no surprise that this Saxon title is just another in their vast collection.

The group is an English band and were formed in the 1970s and the developers have decided to pay homage to them with a brilliantly designed slot that is aesthetically pleasing.

The game features a background that can be associated with rock and roll, with it being set in a bar whilst there are a number of motorcycle references throughout the game.

This Saxon online video slot game is relatively simple to play as it follows a traditional layout. The playing grid consists of 5 reels and 3 rows, in which there are a total of 10 paylines.

There is a panel at the bottom of the screen that allows bettors to customise their bet value, as well.

Las Vegas Casino bettors will find that there are a couple of different Saxon bonus features available to trigger in this game, with each of them potentially making the entire gameplay experience rather rewarding.

The first of these Saxon bonus features comes via the wild icon, which is shown as a hard as nails symbol. It has the power to substitute for all regular paytable icons and can provide the biggest wins when 5 of a kind is won.

Each of the symbols in the game can also appear stacked – except for the scatter – and fill an entire reel. This Saxon bonus feature will also see players have their win multiplier be increased by +1 if this happens. If stacked wilds are on the reels, the multiplier will increase to +2.

There are two different scatter icons available in this game, with the motorcycle and the singer working in tandem with each other. Players who are able to land both on a single spin will trigger between 5 and 15 free spins, as well as the active win multiplier!

This win multiplier will not reset if a win is not occurred in the feature, whilst those who land 2 or more additional scatters during the Saxon bonus feature will be able to get between 5 and 15 new free spins!

A minimum bet of €/£/$0.10 is required in order to rock out to this Saxon slot game, although those that want to be jumping around as if they were still in the prime of the rock n’ roll era will be able to place €/£/$100 on each spin as a maximum bet.

The return to player (RTP) rate is variable, although 96.24% is the default level. In addition, this game features a level of high volatility, thus making wins infrequent but potentially huge.

This video slot developed by Play’n Go isn’t the most interesting game available from the slots creator, but it shows very well what they can produce and we can’t say it’s not engaging or fun for a Saturday afternoon.