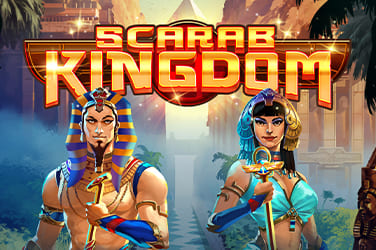 This slot game provides online casino players with the chance to win up to 5,000x the bet whilst also playing with an indefinite number of free spins!

The slot game is an Egyptian-themed slot title that has been created and produced by Microgaming and Just for the Win, with homage seemingly being paid to the scarab beetles; creatures that were incredibly popular during the Ancient Egyptian era.

The developer has managed to provide Scarab Kingdom players with a bright and vibrant game screen as they have used a number of colours and top graphics to make the experience as immersive as possible.

Scarab Kingdom online slot is set on what appears to be a canal, with players seeing a jungle setting that also has a golden statue to the right-hand side of the grid as they appear to be making their way into the kingdom.

There are a number of different symbols available on the paytable of Scarab Kingdom online slot game, with the traditional royal playing cards making up the low-value icons, which are then followed by symbols that are represented by lotus flowers, eyes and Ankhs.

These icons are then followed by Cleopatra and a Pharaoh; both of which are able to appear as either 1×1 shapes or as large as 1×4 sizes!

Just for the Win have made their Scarab Kingdom online video slot game come equipped with a playing grid that consists of 5 reels and 4 rows. There are a total of 30 paylines that are available in this game that will allow players to form winning combinations on.

There are a number of buttons available to the right of the screen, with each of these allowing for the game to be customised as much as possible to suit the player’s needs.

The slot game has a number of different bonus features available to Las Vegas Casino players in Scarab Kingdom, with many of them being as rewarding as each other.

The first of the bonuses that may be noticed is via the Bonus Bar that can be found at the top of the playing grid when the game is being played. In addition, each Scarab Kingdom slot reel has a Scarab Holder located above it and this can be filled when three scarab symbols appear on the same reel over the course of playing. The icon will be added to both of these functions.

Once the Scarab Holder has been filled, it will trigger the Wild Scrolls feature that will see the reel turn completely wild. These wild stacks will then move down a position each time a spin is made until they completely disappear.

Players who are able to collect 100 scarabs on the Bonus Bar will see Cleo’s Bonus be triggered, which will then see the basic icons be replaced by 12 face-down coins. These will be chosen one at a time with the aim to match 3 to win a prize of either 15x, 40x, 200x, or 5,000x the bet! The Bonus Bar will reset once this feature comes to an end.

The last of the great Scarab Kingdom bonus features available is a free spins game that can be triggered when three scatters appear on the middle three reels. An indefinite number of Pharaoh’s Free Spins will be awarded, which will see the Wild Scroll appear on reel 3 as will a 1x multiplier.

Las Vegas Casino players are able to play this Scarab Kingdom online video slot game with a minimum bet of €/£/$0.20 per spin, or they can place a maximum bet of €/£/$25 if they want to try and win the riches the Ancient Egyptian period is known for.

The return to player (RTP) rate for this Just For The Win title is set at 96.13% by default and consists of a high volatility level.

Players need to go on the adventure that Scarab Kingdom slot game provides them with immediately as it has all the potential of proving to be as lucrative as possible!

If the 5,000x the bet potential was not enough, the fact that there are an indefinite number of free spins available, as well as increasing multipliers and Wild Scrolls, there is plenty to get excited about!

If you enjoyed playing Scarab Kingdom online slot, but you want to feel like a true Vegas player, take a look at Las Vegas Casino’s jackpot slots and win big time.