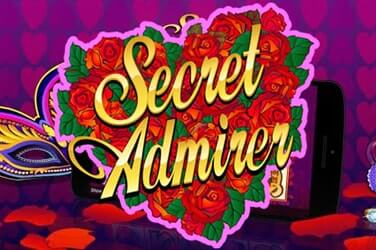 This slot game from Microgaming certainly sets the tone for romance with the theme that the game adopts, with a background that has been coloured with a purple that features a number of roses along the edges and the bottom of the screen.

Whilst there is not too much else to the background, the Secret Admirer slot game’s paytable also helps to make the romance theme come to life a little, as there are a number of symbols made available that can be considered to be gestures of some kind.

Although there are a large number of different playing card values, there is a rose, perfume, a rose wreath, a jewel, the game’s logo and a mask, which doubles up as the game’s wild.

This online slot game is played on a traditional playing grid, with a total of 5 reels and 3 rows having been made available. There are 9 paylines available in this game, with each of them fixed on each spin made.

As mentioned, the mask is the game’s wild and this can have a hand in helping players to win some lucrative prizes when utilised. This is because icon can help to complete winning sequences where possible.

The diamond ring, though, is the biggest prize for those who are looking to trigger the biggest Secret Admirer bonus feature, as this icon will provide players with a win multiplier of between 2x, 6x, 20x and 50x the bet whenever 2 or more of them appear in any position on the reels.

Secret Admirer slot players who are able to land two or more of these diamond rings will also be rewarded with 3 free spins, which will see the icons be held in place for each spin that is made, thus providing a new payout for each turn, as well!

If additional scatter icons land on the grid during Secret Admirer slot gameplay, then 3 additional free spins can be awarded to players, thus allowing for the potential of 5 scatters to appear across the board, thus providing a win of 50x the bet!

The return to player rate for this Secret Admirer slot game is 96.08% and comes with a medium volatility level.