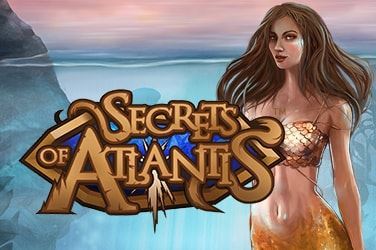 You can usually rely on NetEnt to deliver top-rated casino slots entertainment, and they’ve done it again with this nautical-themed slots title that has more than a hint of Ancient Greece about it. Secrets of Atlantis is one of many NetEnt classics to be found in the library of great slots titles at Las Vegas Casino and has proven to be popular with players of all experience levels.

Secrets of Atlantis slot game presents as a 5-reel, 4-row, 40 payline game, which is playable from as little as $/£/€ 0.2 per spin up to $/£/€ 200, across all mobile devices, it is suitable for both small stakes players and high rollers alike. It’s a medium variance game with a potential top prize of x1600 your stake, and the RTP is an extremely impressive 97.07%, one of the highest RTPs around.

In this slot game, the nautical theme is apparent from the outset as players are submerged into an underwater world that is full of references to the elusive city of Atlantis. In fact, playing this game is a soothing rather than a dramatic experience, despite the Greek mythology references. In  Secrets of Atlantis video slot the reel symbols include turtles, jellyfish, crabs and gem representations of sea creatures. The big symbol to look out for is the clam, which offers the highest value and can pay you x400 your line bet should you manage to bring up five clams on a single line. And look out for the mermaid, who represents the Wild.

This is a NetEnt slot game, so as you would expect, there are plenty of bonuses and features packed into Secrets of Atlantis online slot. One of the most interesting things in Secrets of Atlantis online slot is the Highlight feature in which symbols across the 3 central reels may be randomly highlighted on each spin. If you manage to have all the symbols on the middle reels highlighted, you will launch the Colossal Symbols Respin. This changes all of the middle reels into a single reel full of Colossal symbols, which are 3×4 blocks. And, if the reel on which the Colossal symbols appears is highlighted, you land another Colossal Re-Spin.

In Secrets of Atlantis online slot we were also impressed with the Nudge Wild feature. In this bonus, the mermaid represents the Wild and she may appear fully or partly across the reels. If her appearance is partial, her symbol nudges vertically up and down the reel until it is filled, giving you a whole reel full of Wild symbols. And if you should land a Colossal Stacked Wild on the reels during the Colossal Re-spin, then the Colossal Stacked Wild expands to take up the entirety of the three central reels.

Unusually for a modern NetEnt game, there is no free spins bonus with Secrets of Atlantis, but the bonuses that are included in the game provide ample compensation, and there is the potential for some significant wins, particularly through the Colossal Re-Spin bonus. Overall, this is an attractive and enjoyable slot game to play that should provide plenty of entertainment for all players.