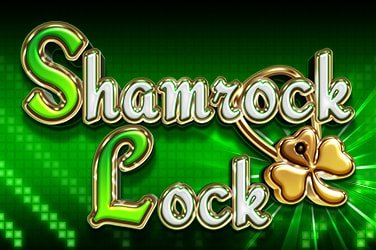 Using the four-leaf clover, one of the most recognized symbols of luck globally, as the basis for a video slot game is a clever bit of work by Inspired Gaming, with Shamrock Lock video slot being the result.

With this theme, it is the colour green that dominates Shamrock Lock online slot, since the clover is primarily seen in Irish cultures as a symbol of good luck. The background is a bright emerald colour, with the reels bordered by gold. Shamrock Lock slot logo, with a golden four-leaf clover hanging from it, is at the top of the reels, and it also appears on the reels itself as the highest-paying symbol.

There are a number of other lucky charms which show up on the reels, such as the lucky number seven, a bright green leprechaun hat, a horseshoe, a red and white mushroom, and a pot of gold at the end of a rainbow. All of these are the game’s high-value symbols, with standard card symbols being the low-paying ones.

Shamrock Lock slot is a 5 reel video slot with three rows and 10 paylines. There is the usual base game where landing three or more of the icons in combination on a payline will give you rewards, with a few twists as well.

One of these is the Fortune Bet option, which can unlock the Lock ‘n’ Roll feature. Here, if you opt for the Fortune Bet, your stake is increased by 50%, but in return, the first three reels will be stacked and locked, increasing the chances of getting big wins on the subsequent spins.

There are also mystery symbols, denoted by a question mark, that can randomly land on the reels, and transform into any of the other symbols after a spin for increased chances of combinations and payouts.

The golden shamrock, which can pay out a maximum of 500x if you land five of them on a payline, can also trigger the Wonder Spins bonus game, if it lands stacked on the middle reel.

During this Wonder Spins bonus round, you can get a reel re-spin, with stacked wilds on the 2nd and 4th reels. In Shamrock Lock if you win after this spin, the round ends. However, if you do not, there will be another respin, with the 1st, 3rd and 5th reels having stacked Wilds this time. Thus, you are guaranteed a win of some sort during this bonus round.

Shamrock Lock players can bet from 0.1 right up to 200 credits on Shamrock Lock video slot, with the credits being spread equally across the 10 paylines. The RTP on this online slot is between 95% and 96%, depending on its configuration.

Shamrock Lock video slot game certainly lives up to its theme, with luck playing a big part in the wins you pick up while spinning the reels. The bonus game is a nice addition since it gives guaranteed wins, and you can also gain some large wins on the base game if you manage to land the high-value symbols. Shamrock Lock slot should appeal to all fans of slot games, due to its overriding theme of luck, which will be a familiar one for players.