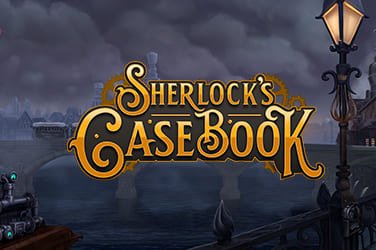 Rather obviously, Sherlocks Casebook online slot game features the theme of Sherlock Holmes, who is the world-famous detective. However, 1×2 Gaming have provided players with a steampunk twist on the character by adding goggles to the deerstalker and adding some metal to his pipe. Nonetheless, the slight twist on this world-famous character is one that has been done rather well as this slot is visually impressive.

When exploring the paytable of this Sherlocks Casebook video slot, players will be able to find that there are a number of different icons available in which they are able to collect.

The low-valued items include the traditional playing card icons, but these are then followed by the deerstalker, the pipe, the violin, the pistol, the magnifying glass and the Baker Street sign, which has the ability to pay 1000x the stake when 5 of these appear on the playing grid.

Speaking of the playing grid, this Sherlocks Casebook online slot contains one that features 5 reels and 3 rows, and provides players with a total of 25 paylines. These paylines are fixed, therefore each will remain in play for each spin taken.

There are a couple of buttons to the left and right hand sides of the playing grid that help customise the gameplay experience a little further, with players able to adjust their bets and also play with the autospin feature.

There are a number of different bonus features available in this Sherlocks Casebook slot, and they feature the main characters of the Arthur Conan Doyle series.

Sherlock Holmes features as the expanding wild in this Sherlocks Casebook game and whenever he lands, he has the ability to expand and fill the reels that he appears on. He can then replace all icons, except for the scatter and has the ability to appear during the free spins game.

Irene Adler is the Sherlocks Casebook’s scatter icon, and she can appear anywhere on the reels to trigger the free spins bonus. Players who land 3 of her will receive 10 Free Spins whilst 4 and 5 icons will land 15 and 20 Free Spins respectively.

Sherlock Holmes’ sidekick, Dr Watson, is the sticky wild in Sherlocks Casebook game, and he can stick to the reels for a multiple number of spins.

1×2 Gaming have made this online slot game playable from as little as €/£/$0.25 per spin, whilst those that like to wager the bigger amounts are allowed to place a maximum bet of €/£/$100 on each turn made.

Sherlocks Casebook slot game features a return to player (RTP) rate of 96% and is considered to be of a medium volatility level.

The Sherlock Holmes theme is one that is truly popular amongst many slot game enthusiasts and Las Vegas Casino players looking for one that features the famous detective will enjoy this particular title.

The addition of the three main characters as special icons is rather brilliant, whilst the effective gameplay and free spins bonus round make this game one that is rather enjoyable to play for a sustained period of time.