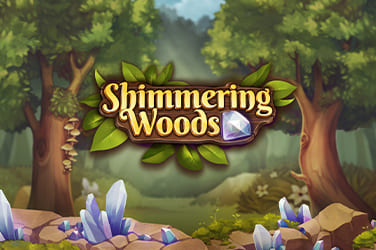 Free spins, splitting symbols and up to 7,776 different ways to win are all available to those who decide to explore this Shimmering Woods slot game!

Play’n GO’s Shimmering Woods online slot game features excellent graphics and visuals that will help to provide bettors with the chance to fully immerse themselves in the theme that has been adopted.

The game’s background features a rather mystical element to it whilst the woods that the title clearly alludes to is brilliantly depicted within the setting used, as is the shimmering aspect used.

The icons available on the paytable feature some mystic to them, as well, with the traditional standard playing card values being followed by a number of different coloured gems that can provide some of the biggest prizes on offer.

The gameplay experience provided by Play’n GO in this Shimmering Woods online slot title is one that has to be considered exceptional, as there is a lot more to it than it would first appear.

The playing grid may look like a traditional 5-reel, 3-row slot game that has 243 different ways to win, however there is a Shimmering Woods bonus feature that will enhance it further, which will be explained a little below.

One of the main Shimmering Woods bonus features is the expanding reel dynamic that the developer has used in a number of their other titles. This game may start with 243 ways to win, however via the use of splitting symbols, there could be up to 7,776 different ways to win!

At the start of each spin, a random paytable icon or the game’s wild will be chosen in a box that is positioned above the reels. If this icon appears on a reel, they will then split into two icons and increase the number of win ways possible. This is an exceptional Shimmering Woods bonus feature considering a cascade pay system is also available.

The cascade mechanism will remove the winning combinations and will allow new icons to appear. The more wins that appear on the spin, the bigger the win multiplier will be!

In addition, another Shimmering Woods bonus feature is the free spins game that can be triggered when 3 of the purple crystal scatters appear on reels 1, 3 and 5. Once this feature is triggered, a mini-game will be activated called the ‘Shimmer feature’ and this will split up to 3 of the scatters and provide the following:

In addition, the free spins game will see the box above the reels hold all pay icons available and the active splitting icons from the shimmer feature will be lit up. If these icons land, they will then be split into two. The win multiplier will also remain in use throughout the game.

Players are able to retrigger each of these features by landing additional scatters.

As probably expected due to the Shimmering Woods bonus features available, the return to player (RTP) rate is variable and can fluctuate depending on the game. These can range from as low as 84.20%, but equally, go as high as 96.20%. This slot can be considered to be high on the volatility scale.

The minimum bet Las Vegas Casino bettors are able to wager is €/£/$0.20 per spin, although a maximum bet of €/£/$100 can be placed for those looking to win the biggest rewards possible!

Shimmering Woods slot game is an exceptional title to play and one that features a host of different bonus features that Las Vegas Casino bettors will love as it will keep them active and involved with each spin made!