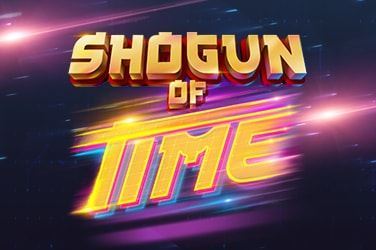 Free spins, 243 winning ways and an expanding playing grid can all be found in this Shogun of Time online slot game from Microgaming and Just For The Win at Las Vegas Casino!

Microgaming and Just For The Win have created a rather funky theme with their Shogun Of Time slot game as it combines a Japanese samurai with a cyberpunk genre.

The game is presented in a stunning way, with plenty of incredible visuals all available. These visuals continue through to the symbols that are provided on the grid with a number of different icons all available that follow a rather Japanese theme, such as coins, a fan, pieces of armour, a helmet, as well as the game’s logo.

Speaking of bonuses, the ‘Reel Splitter’ feature is the main one of this game and is only available during the base game.

This feature will trigger when players land a combination of four icons along a payline, and when it does, a fifth reel will appear in the middle of the playing grid. In addition, the other reels will remain locked, and the new reel will spin once to give players the chance to hit another winning combination.

As well as expanding to a 5-reel grid, there is also the opportunity to win from 243 ways instead of the initial 81.

Furthermore, there is a free spins round and players can trigger this when they land three or four scatter icons anywhere on the reels. Those that land three will receive eight free spins, whereas those who land four will receive 14.

Players will be provided with the 5-reel grid that features 243 winning ways, as well as being provided with Stacked Wilds on that middle reel. Furthermore, wins can be made from any direction on the grid, as wins will pay both ways.

The game’s return to player (RTP) rate stands at 96.02% and comes with a medium volatility level.

With so many great bonus features available in this Shogun of Time online slot game, Las Vegas Casino players will find it hard to find a game that offers them a better experience.

The expanding playing grid means more wins can be obtained than initially thought, whilst the free spins bonus will be played on that expanded grid, with a number of stacked wilds for good measure!

Players who want a lucrative and enjoyable gaming experience should strongly consider this slot game as soon as they can!