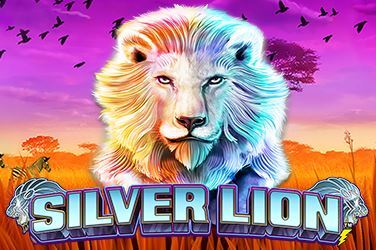 Silver Lion is a video slot released in 2016 by Lightning Box, a provider established in 2004 who developed popular classics like Dolphin Gold and Panda Pow. It’s a classic safari slot game featuring lions, zebras, hippos and other wild animals, and it’s set in the gorgeous African savannah. Silver Lion online slot gameplay is accompanied by the cheerful sound of chirping birds and brush swaying in the wind. It’s a great looking slot and one that’s immediately recognisable for its blue/orange colour palette. The online slot game even got a follow-up, Silver Lioness, just a couple of years later.

Silver Lion is a ways to win slot which features 1,024 ways to win, meaning that all players have to do is line up matching symbols from left to right on adjacent reels. The lion symbol is the slot game’s best paying standard symbol, paying out up to 250x the bet for five symbols on adjacent reels. However, the game’s diamond Scatter offers some truly fantastic wins of up to 800x the bet for five adjacent symbols. Lower valued symbols of zebras and meerkats pay out between 10x and 150x the bet for two to five symbols.

Silver Lion has just the one bonus feature, but it’s done pretty well. Players can trigger the bonus Free Spins mode of Silver Lion slot game by landing three or more diamond Scatter symbols on the reels. Three, four, or five Scatters will trigger eight, 15, or 20 free spins, during which any Wild Tree symbols which appear on reels 2, 3, or 4 will activate a multiplier of 2x or 3x for that win, up to a maximum of 27x the bet. As the Silver Lion slot game’s only special feature this is a pretty basic bonus, and yet it can be the source of some great wins without overcomplicating the slot’s mechanics.

Silver Lion’s average return to player is 96.13%, meaning that for every $/€/£100 players spend on the reels they can expect to make a return of around $/€/£96.13. It’s a pretty average return, so if players enjoy the gameplay of this slot it shouldn’t count against it. Most of the Silver Lion slot game’s biggest wins are to be found in the Free Spins mode, which means it’s worth spinning the reels for a little while in the hopes of landing some of those great multiplied wins.

Silver Lion is a pretty classic online slot; it was first released in 2016 and while it’s starting to look its age, it’s still got a loyal player base and this is largely down to the video slot’s great gameplay. It’s not a feature-packed slot by any means, but the Silver Lion game’s Free Spins mode – when players manage to land some of those excellent multipliers – can offer some fantastic wins and it rolls around often enough to keep play interesting for a long time. If you don’t mind your slots pared down and simple, give Silver Lion a go – you might be pleasantly surprised.

Get into an unforgettable online casino experience brought by Las Vegas Casino whose mission is to provide you with the thrill of the glitz like you would have in Vegas. Check more of the most popular slot games after rating the Silver Lion slot game.