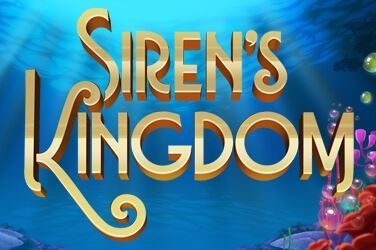 Brought by Iron Dog Studios, this is an underwater slot themed around sirens, the beautiful mythological creatures that would lure sailors to their doom in Greek mythology. In keeping with the Siren’s Kingdom slot game theme, the soundtrack is dark and ominous, and there’s a sinister beauty about this slot that’s unexpected. Let’s take a look at how the slot plays.

This game is a payline slot with 30 paylines in play, which means that players must line up identical symbols across one of these 30 paylines to win. The slot game’s highest paying symbol on the reels is the clamshell, which pays between 20x and 400x the line bet for three to five symbols on a single payline. Siren’s Kingdom game nautilus shell symbols pays up to 300x the bet for five symbols on a payline, while lower paid symbols include 10 to A symbols, which pay up to 40x or 150x the bet for five symbols on one payline. The Siren’s Kingdom game payouts are pretty decent, but the biggest wins are found in the slot’s bonus features.

There are a few features that can lead to bigger wins in Siren’s Kingdom. During the base game, Wild symbols expand down the reels to increase winning opportunities. Wilds land on the top slot of any reel and then expand to cover the rest of the reel, and substitute for any symbol in the game except for Free Spins.

Free Spins are triggered by a beautiful octopus symbol, which can appear in any position on the slot. Three octopuses will trigger 14 free spins, four octopuses trigger 25 free spins, and five octopuses trigger a whopping 36 free spins. This is a pretty generous free spins round from Siren’s Kingdom game compared to most slots, and the Free Spins round of this slot also contains sticky Wild symbols which stick to the slots and expand outwards, disappearing after the second spin.

Siren’s Kingdom offers a return to player of 96.18%. This RTP means that for every $/€/£100 players spend playing Siren’s Kingdom, on average they will win around $/€/£96.18 back – although obviously many game players win much more or much less than this. It’s a perfectly decent RTP and one that most players should be happy with. Siren’s Kingdom game is also a medium to high variance video slot, however, and this means wins don’t roll in on every other spin, so be prepared to spin for a while on this game to make those big bucks.

Siren’s Kingdom is a good video slot, though not much more than that. The slot game’s features are pretty run of the mill, although it’s nice to see so many free spins dishes out for only a handful of Scatters. The graphics of Siren’s Kingdom online casino game are a little plain, although a few gorgeous symbols combined with the slot’s fantastic theme music is enough to make this slot game stay with you for some time after you stop spinning the reels. Siren’s Kingdom game players who like slots with a little darkness in them might find Siren’s Kingdom alluring, and should give it a spin.

We aim to make you feel like you were in the Vegas strip playing under the bright chandeliers of the Bellagio and crossing the glamorous halls of slot game machines. Check our slot games page today and play more mobile-first games like Siren’s Kingdom slot game here at Las Vegas Casino.