So Many Monsters Slot 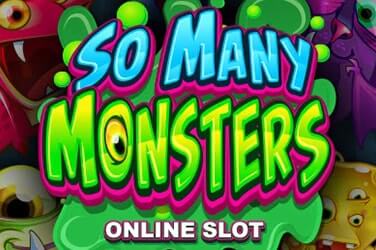 This slot online provides Las Vegas Casino players with a huge amount of fun, as there are a number of free spins available to trigger in this Microgaming slot!

So Many Monsters Slot Theme

The background to this So Many Monsters online slot game is perhaps fitting of the theme that Microgaming have decided to opt for, as they have managed to keep things fun and vibrant, but rather simple at the same time.

All of the action takes place on the playing grid that features a number of cartoon-style drawings and bright colours, whilst the monster characters all remain fun and enjoyable via the use of animations that have been provided when a winning combination has been formed, as well.

Speaking of the monster characters, these guys make up a large part of the game’s paytable, as do the traditional royal playing card icons.

So Many Monsters Slot Online Gameplay

There is a huge amount of fun attached to the So Many Monsters slot gameplay experience, despite the fact that the game is played on a grid that consists of just 5 reels and 3 rows.

There are a total of 25 paylines available, with each of them fixed, but the monster icons that are formed in a winning combination have the potential to split up to five times and potentially give players a total of 25 monsters on one payline!

A number of So Many Monsters bonus features are available in this game, with Microgaming no strangers to adding in a number of features to keep the entertainment going for as long as possible.

The So Many Monsters game logo is the game’s wild icon and this can be used to try and complete any potential winning sequence that can be formed by replacing any of the regular icons available on the paytable. It does have a rather cool animation, though, as it will jump from the screen and leave a splat over the screen.

So Many Monsters Free Spins Features

The main So Many Monsters bonus feature is the game’s ‘Free Spins’ bonus, with players able to trigger this feature when they land 3 or more of the scatter icons, which appear as a green splat symbol.

Las Vegas Casino players who manage to achieve this will be able to have the option to choose one option from a possible set of five to play with, with each of them providing a high-value reel symbol.

Each of the monsters will be replaced by the chosen monster and will remain for the duration of the chosen number of free spins.

So Many Monsters Slot Game RTP

The return to player (RTP) rate for this So Many Monsters slot game is 96.22% and comes with a medium variance level, which means wins and prizes can be rather moderate in regards to frequency and size!

So Many Monsters Slot Verdict by Las Vegas Casino

Players will be able to enjoy the monsters that are available in this game when they are able to trigger the free spins game that can potentially make things rather lucrative, especially as the RTP rate is set at a reasonable 96.22%!

Find the best online slot games at Las Vegas Casino now and get a realistic casino experience while having fun.