So Much Sushi Video Slot 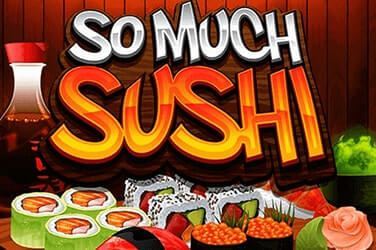 Fancy going for a bite of sushi? Maybe splitting symbols and free spins will help convince you, as this So Much Sushi slot game will have players licking their lips!

So Much Sushi Video Slot Theme

Whilst there are many sushi lovers throughout the world, some would argue that the food never looked so good than in Microgaming’s So Much Sushi online video slot game!

The developer has provided some simplistic but effective themes with their titles over the years and this particular game is no different, with the background of the game appearing to be up against a wooden setting, whilst the icons have been expertly designed as well!

So Much Sushi Game Paying Symbols

The paytable features symbols that consist of the traditional standard playing card values, whilst these are then followed by various different types of sushi that will have players salivating at the lips.

So Much Sushi Video Slot Gameplay

Thankfully, whilst all the imagery of various tasty looking sushi dishes can look rather distracting, Las Vegas Casino players will not have to concern themselves too much with the gameplay experience, as it is one that follows a really simplistic approach.

The So Much Sushi slot game playing grid consists of 5 reels and 3 rows, whilst there are a total of 25 fixed paylines available to form winning combinations on!

So Much Sushi Game Bonus Features

A range of different So Much Sushi bonus features exist in this game that can make it potentially rewarding for players; especially given that sushi can be particularly expensive to enjoy in reality!

The first of the special bonus features available is via the So Much Sushi logo that can be found on the playing grid, with this icon being the game’s wild. This can help to substitute for all regular paying icons and form additional win sequences, whilst it can also provide a payout when it is part of its own combination and provide a multiplier for three or more!

How To Get So Much Sushi Slot Free Spins

The next So Much Sushi bonus feature available in this slot game is the Free Spins game that can be triggered. This is activated when players land 3 or more of the game’s scatter icons; the bottle of soy sauce and the bowl of wasabi icon.

Three of these icons will provide players with the opportunity to win a number of free spins when they will need to select a symbol. The chosen icon will then provide between 8 and 16 free spins, whilst the selected icon will replace all high-paying symbols for the duration of the bonus. In addition, this bonus can be retriggered, as well!

The last of the So Much Sushi bonus features on offer includes the symbol splitting feature. This feature can help to drastically improve the prizes won, as this feature will see the potential of a winning combination of up to 25 icons appearing!

So Much Sushi Slot Game RTP

Microgaming have made their So Much Sushi online video slot game available to play with a minimum stake of €/£/$0.25 per spin, or for a maximum bet of €/£/$5 on each turn made.

The return to player (RTP) rate for this game is 96.22% and comes with a variance level that is considered to be of a medium rate.

So Much Sushi Video Slot Verdict by Las Vegas Casino

The developer has had huge success in this game series and their take on the Japanese food is just one reason why it has proven to be incredibly popular, with many Las Vegas Casino players already playing the game!

With free spins and a splitting symbol feature, sushi may never have been as more rewarding and tasty as it has ever been than in this So Much Sushi slot game!

Play the best video slots at Las Vegas Casino today and be part of the ultimate casino experience while having fun.