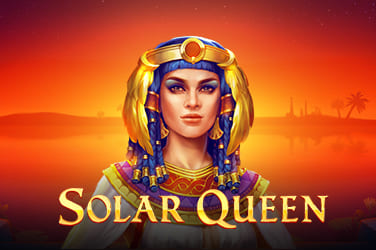 10 free spins and flaming frames are available in this Solar Queen slot game, as is an RTP rate of 95.78% that comes with a high volatility level.

Ancient Egypt has been a highly popular source of inspiration for slot game developers and Playson has decided to provide their take on it with their Solar Queen slot game.

There are a number of visuals and imagery that can quickly make this game identifiable with the theme to have been set, with the game featuring a top background.

On the paytable, there is a number of symbols that feature the various Gods of the historic period, as well as scarabs, burning suns and the Solar Queen herself, who can appear in stacks.

Playson has provided bettors at Las Vegas Casino who play this Solar Queen slot game with a traditional playing grid consisting of 5 reels and 4 rows. There are a total of 20 paylines available with each spin made, with a combination of 3 or more identical symbols being required from left to right to trigger a payout.

One of the main Solar Queen bonus features available is the ‘Flaming Frames’ feature and this is rather unique compared to many other slots available at Las Vegas Casino.

Whenever a sun icon appears on the grid, a flaming frame will appear around the symbol’s position. The next 10 spins will see more and more of these frames appear whenever the suns appear. After the 10 spins are made, players will see the frames be turned into wilds.

In addition to this Solar Queen bonus feature, players are also able to trigger a free spins game that can provide some lucrative rewards.

In order to trigger this game, players will be required to land 3 or more scatter icons and when they do, they will instantly receive 10 free spins whilst the sun icons will instantly turn wild. Furthermore, these icons will remain locked in place on the grid for the remainder of the bonus, with up to 200x the bet possible to win!

A return to player (RTP) rate of 95.78% has been provided by Playson, although there is a high level of volatility, as well.

Solar Queen slot game is a top title from Playson and one that will provide bettors at Las Vegas Casino with the opportunity to earn some nice rewards when they spin the reels!