Space Invaders is a new slot game from Inspired Gaming that was launched in December, 2021. Inspired Gaming is a popular slot game provider that was founded way back in 2001. They have a good reputation in the online casino industry for making popular online slots and virtual sports games. 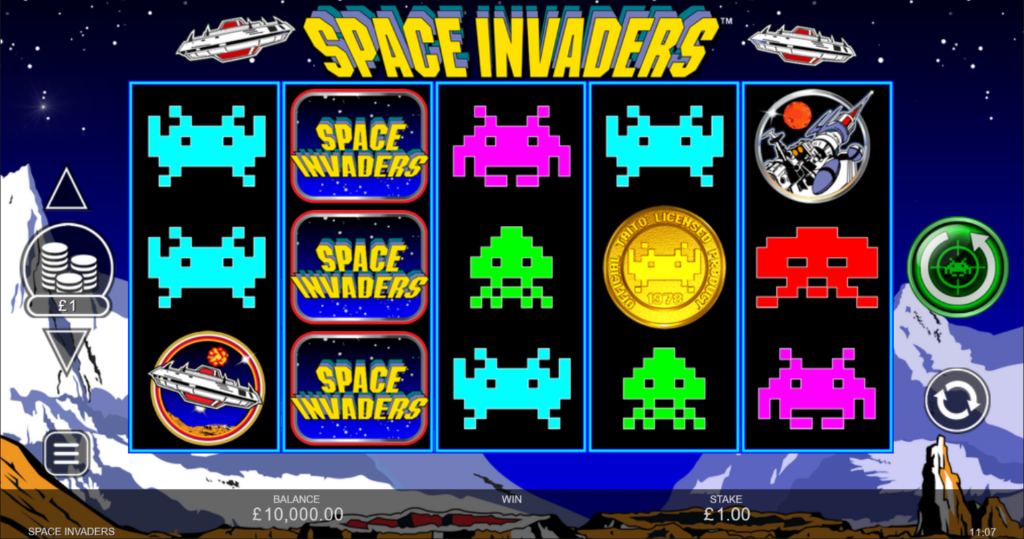 Inspired Gaming has kept the core of the slot game as that of the original and made some tweaks to make the game look appealing to the modern world. Space Invaders takes you back in the memory lane to the good old days of Arcade games. The soundtrack and the sound effects perfectly suit the theme of the game.

The backdrop of the game is a Snow Mountain at night times with volcanoes visible at the bottom of the screen. You can also see the shining stars at the top over the snow mountains. The slot is a 5-reel 3-row set up with a dark background.

All the reels are separated by the blue lines. The name of the slot game can be seen at the centre in big yellow letters with shadows that are leaning onto the reels. Inspired Gaming has paid attention to every detail to give the players a classic arcade feel. 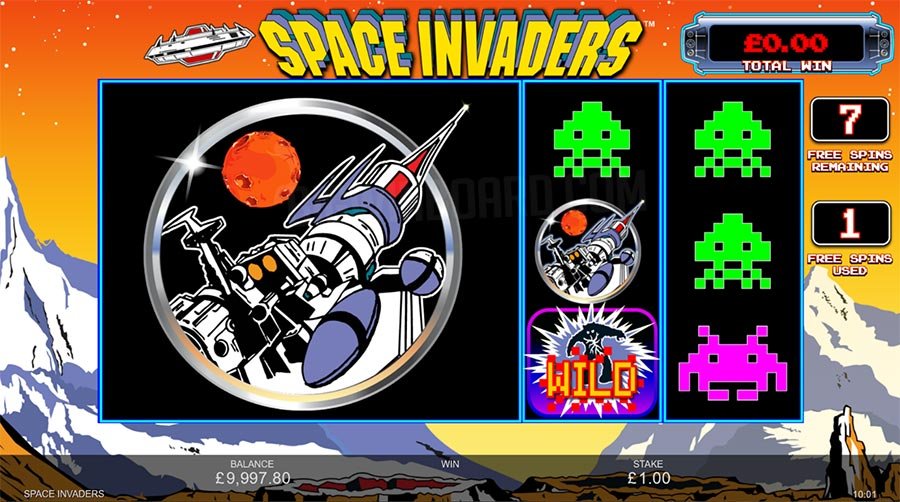 The symbol with the word “WILD” written over it acts as a Wild Symbol and substitutes for all symbols except the Scatter. 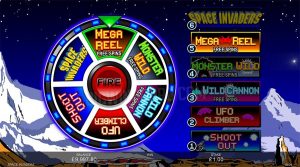 Space Invaders has multiple bonus features that can increase the payout on a spin.

In the base game during a spin, an UFO will fly over the top of the reels at random and a cannon tries to shoot the UFO. If the UFO is hit by the cannon, one of 5 reel modifiers will be awarded to the player.

– Mega Reel – A mega sized reel (3×3) appears that can cover the left, center or right side of the reel window and the remaining reels land around the mega reel

– Bonus Boost – Extra Bonus Symbols are added to the reels for a spin.

There are two more reel modifiers UFO Only and Cannon Only.

– UFO Only – At the end of a losing base game spin, a UFO can fly over the reels by shining a light beam on to a symbol that will grow into a super sized symbol

– Cannon Only – At the end of a losing base game spin, a cannon can slide under the reels and shoot random symbols which will cascade into a winning position

Landing 3 or more Gold Coin scatters anywhere on the reels during the base game awards a bonus. There are a total of 6 bonus rounds and you will be asked to spin a wheel to select one of these 6 bonus rounds.

UFO Climber – Pick a UFO and climb a trail of increasing multipliers and play the Space Invaders Bonus after reaching the end.

Wild Cannon Free Spins – Awards Free Spins during which a Cannon will add sticky wilds to the reels that will remain throughout the Free Spins.

Space Invaders – Shoot the Invaders and UFOs get wins and if all the invaders are cleared, an extra bonus is awarded.

At the end of a bonus round, players will be asked to pick from 3 coins. Depending on the coin chosen, it will reveal one of the following:

A Gamble will be offered for a higher bonus or a mystery cash prize. The expected payback for the Bonus Gamble is 100%.

If your balance is less than the cost of the current spin, you can bet your current balance on Spin Chance. If you win in the Spin Chance, a Free Spin will be awarded, if you lose your balance will become zero. Spin Chance offers the players a chance to bet with higher stakes even when their balance is lower than the stake value. 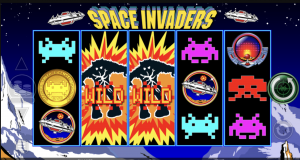 The theoretical return to player (RTP) of the Space Invaders slot game is 95.34% which is a bit low for a slot game.

The base game also has a few bonus features such as Reel Modifiers that will help in winning a higher payout. Play the Space Invaders slot game online at the Las Vegas Casino and have one of the best online slot games experience!