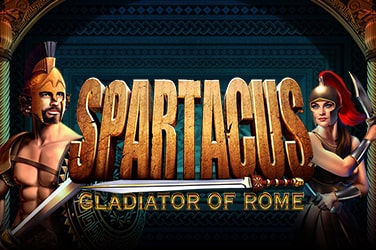 20 free spins and a 20x multiplier are both possible in this Spartacus Gladiator of Rome online slot game by WMS, as are two different sets of reels!

The tale of Spartacus is one that many Las Vegas Casino players may have heard before as it has been made popular in various different forms of entertainment, but WMS’s Spartacus Gladiator of Rome slot game might just be the best and most entertaining!

The developers have provided the game with some visuals and graphics that are befitting of the famous gladiator, as players will find plenty of gold and red on offer that truly help to bring the game to life. The visuals are sharp and are provided with some rather excellent detail, which is always great.

There are a number of different symbols available in this Spartacus Gladiator of Rome slot game, with the paytable consisting of the traditional playing card suits that have been designed as quality gems, whilst these are followed by a sword, a gladiator’s helmet, a lion and a Sectour – the toughest opponent the gladiator will come up against, hence why it is the most rewarding of the symbols when five appear on a payline!

The game’s wild is the logo, whilst the Colosseum is the game’s scatter, which has the ability to launch the Spartacus Gladiator of Rome bonus feature available in this game.

Having briefly mentioned the paylines above, Las Vegas Casino players will be provided with a total of 100 different ways to win in this game. This is possible by the fact that there are two playing grids that are played simultaneously. However, the number of paylines used can be adjusted, thus giving players full control over their gameplay experience.

The first of the playing grids is the ‘Main Reel Set’ and features a format that follows a 5-reel, 4-row setup, whilst the grid on the right is the ‘Colossal Reel Set’ and this has 5 reels, as well, but 12 rows!

So, for the best part: the Spartacus Gladiator of Rome bonus feature that was spoken about slightly earlier.

The Colosseum symbol is key here as players who land 3 or more of these will be able to trigger the free spins game that is available. This combination, though, needs to appear across both sets of reels.

Any wilds that appear on the ‘Main Reel Set’ will be transferred to the ‘Colossal Reel Set’ and will expand during this feature.

The free spins Spartacus Gladiator of Rome bonus feature can be retriggered, as well, by landing more scatter icons throughout the mini-game.

The return to player (RTP) rate for this Spartacus Gladiator of Rome slot game is 95.94% and comes with a medium rating of volatility.

Players will feel as though they are Spartacus in this Spartacus Gladiator of Rome slot game, as they will be able to win some mighty rewards. Free spins with some rather big rewards will make players feel rather mighty, whilst the two sets of reels that are available will make wins potentially lucrative, as well!

Try this slot game at Las Vegas Casino now! Have some fun and may luck be with you