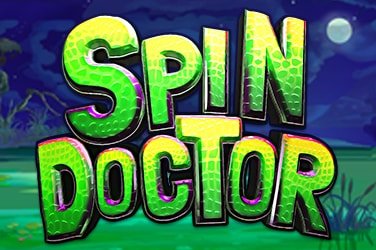 This is an exciting video slot, based on magic, by Inspired Gaming. The visuals of Spin Doctor game are engaging and go with the theme, while there is enough win potential to keep players engaged and entertained at the same time.

Given the magical theme of the online casino slot, there is quite a sinister air about this game. The various symbols on the slot’s reels include potions, voodoo dolls, spell books, witches’ hats and even skulls, all of which add to the scary dynamic, along with the haunting soundtrack.

The background for the Spin Doctor slot game reels is a gloomy swamp, with a wooden house on stilts visible as well. The reels are a bright contrast to this, while there is a spooky crocodile in a top hat and waistcoat who is the doctor in question, waiting to examine you!

This game is a 4×5 reels slot with 20 paylines. The high-value symbols are the various icons mentioned above, with the standard card symbols being the low-value ones. Spin Doctor slot players need to land at least two matching symbols to pick up a win, going from left to right on the reels.

There is a Turbo mode that will speed up the spinning animation on the reels, without changing the outcome, while there is also the Fortune Bet option. Here, Spin Doctor slot game players can increase their bet by 50%, which will also increase the size of the bonus symbol.

Bonuses are achieved by landing the bonus symbols on reels 1, 3 and 5. The Wild symbol for the game is that word, in pink, and as usual, it replaces all other symbols other than the bonus symbol, which is the Spin Doctor himself.

There is also a mini-game that will trigger randomly, where Papa Croc will appear and give you the choice between three tarot cards. Each of these can give a reward, from a big win to landing 5 of a kind combinations on the reels.

Triggering the bonus game will bring up a screen full of bubbles, which you have to burst till you find three of the same colour. The colour will decide which bonus you get.

Red Super Swamp Spins – You get unlimited free spins as well as wilds all over reel 3, until you’ve won 20x of your stake;

Purple Free Spins – You win 10 free spins, while the voodoo doll will remove the lowest value symbol from the reels;

Green/Golden Croc Trails – Spin the dice and gather multipliers, while you also enter the hut and down drinks to earn bigger wins, with the game ending when you’ve drunk too much;

The slot game has a fairly standard Return To Player rate of 95% which is among the market’s average actually.

This is an entertaining video slot game, with interesting bonus features, while being able to pick up wins by landing just two symbols in combination means that Spin Doctor players can pick up a steady stream of low value wins, while the bonuses give the potential for larger payouts.

Check some of the most sought after video slot games like Spin Doctor slot at Las Vegas Casino’s and enjoy a high end online casino gaming anytime, anywhere.