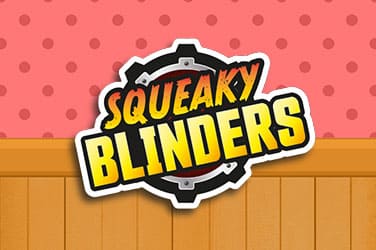 Squeaky Blinders online slot game has Las Vegas Casino players chasing after mice as they look to obtain 1,000x the bet when they capture them with as few shots as possible!

Squeaky Blinders slot game is a game that has been developed by Black Pudding Games that uses a theme that follows a number of mice in a rather fun way.

Squeaky Blinders slot game is a game that has been developed by Black Pudding Games that uses a theme that follows a number of mice in a rather fun way.

Visually, this online slot game is rather impressive as the developers have used some cartoon-based graphics to create the game, thus providing players with an enjoyable experience when they look to try and exterminate the mice that have overtaken the shelving unit that holds a number of plates.

However, there is a playing grid that consists of a traditional 3×3 format, with players being required to shoot three of the same mice as quickly as they can to trigger the best payouts.

As this Squeaky Blinders online slot game follows a scratch card layout, there are no real special bonus features in regards to free spins and wilds, however there are still a number of unique bonuses that can be used.

The game will provide players with the chance to be able to win bigger rewards when they use fewer shots or picks when trying to capture the mice that appear.

In addition, players are able to customise their entire gameplay experience by using the ‘Custom Pattern Autoplay’ feature. Players who use this feature will find that it works almost in the same way as a traditional ‘Autoplay’ feature, however in this game players will be able to decide on the preferred lucky pattern of picks that they want, which will then be adopted by the game.

This Squeaky Blinders online slot game has a return to player (RTP) rate of 96%, which is around the industry average when it comes down to this rate.

Las Vegas Casino players are able to play this Black Pudding Game with a minimum bet of €/£/$0.20 per spin, or for a maximum bet of €/£/$10 on each turn that they make in this game.

Black Pudding Games have been able to provide players with a number of fun and unique games over the years and their Squeaky Blinders online slot game certainly lives up to their reputation.

Las Vegas Casino players looking for an experience that is a little different to any traditional slot game will enjoy this game, although they will need to be at their very best if they are to make the most of it and make it as rewarding as possible!