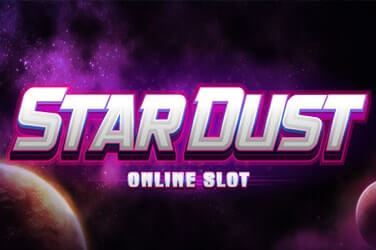 Brought to Las Vegas Casino players by Realtime Gaming, Stardust slot is another great game that users can look to make the most of when looking for the best gameplay and betting experiences.

With a fairy theme – perhaps loosely based on the likes of Tinkerbell – Stardust players will delve deep into an enchanted forest as they look to try and win the biggest rewards possible via some great special bonus features that have been included in this mythical adventure.

The enchanted forest theme is clear as this Stardust slot game’s background depicts one by using some rather mysterious shades of green to cover trees that are visible. There are also some bright sparkles and shining lights, which are the fairies that are floating around and going about their business. The Stardust online video slot is certainly visually impressive, as the game’s icons also receive the same treatment. Each game symbol available has been drawn expertly and can closely be associated to the theme that Realtime Gaming have applied.

These Stardust online video slot icons include things such as crystals, mushrooms, ladybird, butterfly, hive, unicorn, golden fairy and the willow tree – which acts as the scatter icon. Green fairies are the game’s wilds, whilst the blue fairy is a wild that contains a multiplier.

Players who choose to get involved in the mythical adventure provided in this Stardust slot game will be given a playing grid that features 5 reels and 3 rows. There are a total of 243 ways to win, thus providing Stardust slot players with many opportunities to win awards when they form winning combinations of 3 or more icons. There are also a couple of buttons to the right-hand side of the grid in the bottom corner that allow for the game experience to be enhanced and customised.

How does winning up to 50 free spins sound? Well, that is possible in this Stardust slot game via the ‘Free Spins’ feature that can be triggered by the Willow scatter icon. If players are able to land at least 3 of them, they will receive 8 free spins, whilst 4 and 5 will see 15 or 50 free spins won! Each game spin will see one of the slot reels entirely filled with green fairies as well, therefore one wild reel will be included in each spin.

Another top bonus to have been included in the Stardust video slot is the ‘Lucky Feature’ although as the name suggests, players may have to be lucky to trigger this game feature. It can be activated randomly after each spin and when it does, it will provide players by turning between 1 and 5 reels into wild reels. The green fairy can transform into a blue one in this bonus as well, therefore providing a 4x multiplier when it is used as part of a winning combination.

With bets available from as little as €/£/$0.40 available, Realtime Gaming have managed to take into account players of all game levels as they have also provided a maximum bet amount of €/£/$200 on each spin as well. There is a maximum win potential in the Stardust online casino game of 2,000x the stake and with a return to player (RTP) rate of 96.59%, players will feel they have a chance with the medium volatility levelhat has been set.

There is no doubt about the potential that this Stardust slot game has, especially when up to 50 free spins can be won. Las Vegas Casino players expect the very best when using their real money on casino games and this Realtime Gaming title can be considered just that. Add in the fact that the fairies can provide additional rewards, players will be rewarded when they visit this enchanted forest.