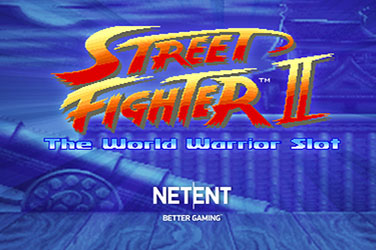 Wilds, free spins and multipliers all make this Street Fighter II: The World Warrior slot game as legendary and epic as the classic arcade video game was!

Gamers of a certain generation will instantly fall in love with Street Fighter II: The World Warrior videoslot as NetEnt has smacked them with all the nostalgia and throwbacks that they could with this themed title!

The game features the same graphics that the classic arcade game had when it was first released, whilst many of the same characters and visuals have also been adopted.

Symbols include the traditional royal playing card icons, as well as various characters and a wild icon that can be found in the game.

This Street Fighter II: The World Warrior slot game will see players go all around the world as they fight different opponents on a playing grid that consists of a 5×5 shape.

There are no traditional paylines available in this game, though, as NetEnt has opted to provide it with a Cluster Pays mechanic that players can look to try and win from. A cluster of at least 4 matching icons will be needed to trigger a payout in this game.

The main Street Fighter II: The World Warrior bonus available will depend on the original street fighter character that is chosen at the start of the game.

Players will have the choice of 8 individuals to choose from at the beginning, and will then be tasked with trying to fill the Wild Gauge to trigger their respective modifiers. This can be done by landing wins that consist of the highest values. The modifiers for each character are:

Another Street Fighter II: The World Warrior bonus is the battle round that can be competed in, with further bonus rounds being triggered depending on the outcome.

Those that lose their battle will be able to play the ‘Car Smash’ bonus where they can win between 5x and 15x the bet, whereas those who win will trigger the ‘Beat the Boss’ free spins game where they will fight against Balrog, Vega, Sagat and M Bison.

Each boss will come with a win multiplier, with the following breakdown available:

Players who get through all levels and defeat all bosses will receive a win of 100x their bet, as well.

Those that are unable to beat the bosses in this round will be able to activate the ‘Insert Coin Gamble’ feature which will see players be required to place a portion of their winnings for the chance to make it to the final boss once again.

The return to player (RTP) rate for this Street Fighter II: The World Warrior slot game is 96.06% and comes with a variance level that is high.

NetEnt has made this game available to play with a minimum bet of €/£/$0.20 per spin, whilst Las Vegas Casino players who want to place the maximum bet will be able to wager up to €/£/$70 on each spin.

Where do we start?! There is so much available in this Street Fighter II: The World Warrior slot game that players will be able to enjoy the throwback of this classic arcade game in its video slot form without feeling the game has not received the attention it deserves.

Packed with bonuses, this game has everything Las Vegas Casino players could ever want!