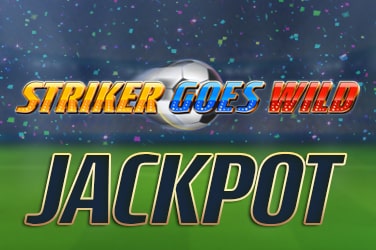 It is time for Las Vegas Casino players to hit the back of the net with this Striker Goes Wild Jackpot slot game, as a number of wilds and a gamble feature can make scoring a goal ever more so rewarding than it has been before!

Players will be taken out to the middle of a football pitch in this Striker Goes Wild Jackpot slot game by Eyecon, as the visuals provided work to a standard that we have all come to expect from the developer.

The game features a background that is of a stadium that appears to be full of a number of football fans that are cheering the player on as they aim to score a goal and strike it rich in this game.

Naturally, many of the symbols available on the paytable of this game fit the football theme expertly well, as well, with each of these having been designed in a fun way and with a cartoon vibe.

The icons available include the royal playing card letters and numbers, but these are then followed by a pair of football boots, the referee’s whistle, an open goal, and the golden trophy, which is the most rewarding regular icon available in this Striker Goes Wild Jackpot slot game, as five will provide an award of 10,000 coins!

There is a football that is the game’s wild icon, whilst the two strikers that can appear on the grid are the game’s scatter symbols.

Eyecon have provided players with a traditional playing grid when it comes down to this Striker Goes Wild Jackpot game, with Las Vegas Casino bettors able to play across a total of 5 reels and 3 rows.

There are a total of 25 paylines available to score a goal on, with bettors aiming to be as prolific as they can be when spinning the reels on this game.

The main Striker Goes Wild Jackpot bonus feature comes courtesy of the two strikers, as these guys are the scatter icon. Players who land three of these – as they can only appear on reels 2, 3, and 4 – a goal pattern will appear above the reels and will turn the stars into wilds. These will then provide bettors with the opportunity to win some bigger rewards.

The wilds can appear in any position on the grid and be used to help form and complete any winning sequence where possible by substituting for all regular icons on the paytable, although they can not have an impact on the scatters.

Furthermore, players who pick up a win are able to try and increase it via the ‘Gamble’ feature that Eyecon has continued to use with many of their slot games. Las Vegas Casino players will be able to double their win by correctly picking the right option for a period of time, however, if they reach 32,000 coins or lose, the game will be over – with the latter option seeing everything be lost on that turn.

A minimum bet of just €/£/$0.25 can be placed on this Striker Goes Wild Jackpot slot game at Las Vegas Casino, although a maximum bet of €/£/$12.50 is also possible for those that are feeling confident in front of goal.

With so many great bonus features available in this Striker Goes Wild Jackpot slot game from Eyecon, players will truly feel how rewarding scoring a goal is in this game.

The wild icons play a crucial role in helping bettors to obtain some great rewards, although the gamble feature might just be the best way to try and earn the amounts that footballers can currently make!