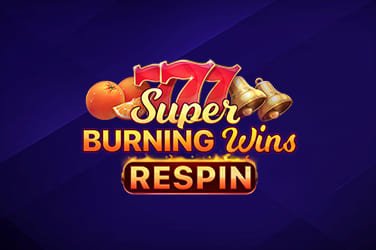 Playson have decided to opt for a rather simplistic and minimalist approach with their Super Burning Wins Respin slot game but they have managed to do it in an effective way and one that will suit many Las Vegas Casino players.

The game features a number of basic visuals and colours, however they remain as appealing as possible, as there is nothing to distract players from the actual gameplay of this game.

When taking a look at the paytable and the symbols available, it is evident the simplistic approach has been continued, as there are a number of classic fruit machine icons all available on the grid.

Following the approach that Playson have adopted, this Super Burning Wins Respin video slot game consists of a simple playing grid that is easy to follow and understand.

The game has a layout that provides just 3 reels and 3 rows, as well as a total of 5 paylines, thus making everything incredibly easy to follow and play.

Despite the nature of this game being rather simple, Las Vegas Casino players can still take advantage of some great Super Burning Wins Respin bonuses that have been made available within the game.

The first can be rather rewarding as it comes in the form of a multiplier. To trigger this, players will need to land 9 identical fruits (filling the whole playing grid with the same symbol) and this can happen on a regular spin or on a respin that takes place.

The respin is another great Super Burning Wins Respin bonus feature that Playson have decided to include in this simple game, as this helps to keep things as entertaining as possible.

Players are able to trigger a respin in two different ways: by landing two full reels of identical icons to try and obtain that third full reel, or by having a spin that does not result in a win. Essentially, for every single loss that occurs, a respin will be provided!

Players who have been given a respin because they managed to fill 2 reels with identical symbols will see these reels be locked in place, therefore giving them the best chance of making a third identical reel.

The minimum bet allowed on this Super Burning Wins Respin slot game is €/£/$0.10 per spin, whilst the maximum bet that can be placed is €/£/$100 on each spin taken.

The return to player (RTP) rate is 96%, whilst the game from Playson features a volatility level that is of a medium rating.

Players who are able to make the most of this simple Super Burning Wins Respin slot game will find that they can potentially obtain some rather top rewards when everything falls into place for them!

The game’s bonuses are great and truly help to bring the classic gameplay style to a modern stance that will be enjoyed by all at Las Vegas Casino!