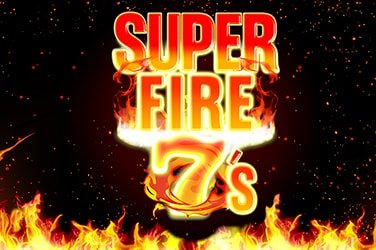 Super Fire 7s is a fiery fruit slot by Inspired Gaming, the provider who brought you Reel King Megaways among others. Despite the ominous flames which lick against the sides of the reels, actually, Super Fire 7s is at heart a fairly traditional fruit slot game, offering minimal features and hoping to get by on the strength of its base game. But how does it fare?

Clearly inspired by the classic fruit slot machines of the 1980s, the reels in Super Fire 7s are filled with watermelons, oranges, plums, bells, and lucky 7s. Unlike most traditional slot games, however, Super Fire 7s sports a ton of paylines – 40, to be exact. To win, all players have to do is line up matching symbols across one of these paylines. The slot’s highest paying standard symbol is the double fiery 7s, which payout up to 20x the total bet for five symbols on one payline. Red and blue double 7s pay out 6x the total bet for five, while bells and watermelons pay up to 4x the bet, and other symbols pay less.

There is one more symbol to look out for in the base game of Super Fire 7s: the star. This is a Scatter symbol, which means it doesn’t have to land on a payline to pay. Star Scatters pay out between 10x the bet and 2500x the bet for between three and five symbols anywhere in view on the reels.

Like many retro fruit slots, Super Fire 7s is pretty basic, and not really a video slot game for those players who like to play feature-packed contemporary slots with randomly triggering bonuses and more. Instead, Super Fire 7s slot game offers just one single feature: Gamble. After every payline win, players can choose to gamble their winnings for a shot at doubling them. Risk averse players can walk away here, but players who like the idea of an easy windfall might choose to take the punt.

Super Fire 7s video slot offers an average return to player of 96.5%, meaning that for every $/€/£100 players choose to spend playing the slot, they will on average win $/€/£96.50 back. This is a decent RTP and compares favourably to many online slots, particularly those based on older machines. It’s a medium to high variance slot game, too, however, which means it’s not for the faint-hearted: be prepared to spin for a while before seeing those winnings pile up.

Most players will probably have some idea by now whether Super Fire 7s video slot game is for them. These days, simple slots with limited features are a bit of a niche interest, with most players looking for more features and bonuses in a slot. If you’re into retro slot games which have more in common with the slot machines of the 80s and 90s than contemporary slots, then Super Fire 7s online slot may well be right for you. If you prefer a slot that packs a bit more in, it’s probably best to move on.

Check more of the best classic online slot games here at Las Vegas Casino and give us your evaluation on Super Fire 7s slot game so we can provide you with the ultimate online casino experience.