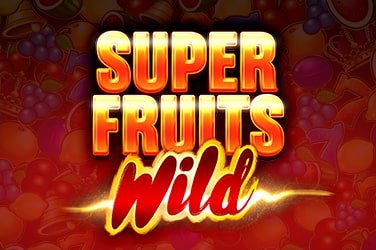 This is a cheerful and enjoyable classic slot game, brought to you by Inspired Gaming, which has colourful visuals and uplifting music that will put you in a good mood straight away, while the gameplay is absolutely simple and classic. With a jackpot of 5,000 coins, players can win big too.

This is a throwback to the classic slot games found at casinos all over the world, so do not go in expecting too many fancy visuals. However, while the theme and design of the Super Fruits Wild slot may be simple, they are still well-executed, with bright and colourful images and classic icons to truly take fans back to a bygone era of slot gambling.

It is a 5-reel slot game, with the various fruit icons serving as the game’s lower-paying symbols. These are the lemons, cherries, watermelons, grapes, oranges and plums.

The high-value symbols of Super Fruits Wild, on the other hand, are not fruits, but some other classic slot game icons, such as a crown, a golden bell, and the number seven, in bright blue and red.

The reels also burst into flames when players manage to land five of a kind for any fruit – a nice touch which makes it clear when players achieve a win.

Overall, the visuals on this game are quite simple, but they are well done and will definitely manage to evoke a sense of nostalgia for players.

As stated earlier, this is a 5 reel game, with 10 paylines, which is a pleasant departure from the standard fruit-based video slot games which have just three reels.

There is a ‘Slam Stop’ button for those who are quick enough, and hitting this button will stop the reels immediately, and so it is useful for potentially being able to halt the spinning when you notice a Wild or a bonus symbol to have dropped on the reels.

The online casino game has a Wild symbol as well, which only appears on the second, third and fourth reels, and expands to replace other symbols and provide winning combinations potentially.

This is quite a simple game, and so there are not as many bonus features as you would perhaps see on other slot games. However, there are two features in Super Fruits Wild video slot which could potentially give players some big wins.

The first one is the Fortune Spins feature. This is a button present below the reels, and when activated, it drops a fourth reel onto the game. The Super Fruits Wild game reels will spin with the rest, and can have payouts of 8x, 16x, 24x, 32x or 40x of the player’s bet. This also works in tandem with the Wild, and so the Wild can land on this reel as well to duplicate along the adjacent symbols, thereby further increasing the win potential.

The second feature is the Gamble option. This Super Fruits Wild’s feature is triggered whenever the player manages a win of 4x or higher in the base game, and players will then have the option to either pick up those winnings, or trigger the Fortune Spins feature.

This game is a medium-volatility offering, with an RTP of 94.98%. Slot players can bet from 0.20 credits all the way to 100 credits in this game, and it has a decent return potential given its volatility

This is a simple, no-frills slot game, which is extremely easy to understand and play, especially for beginners. There is enough win potential to keep Super Fruits Wild players interested, and it should be quite easy to spend time playing this excellent slot game, especially as it is available on mobile as well.

At Las Vegas Casino you will find one of the most realistic online casino experiences available, while you can play the best live dealer games and popular video slots, like Super Fruits Wild.