The Tale of Kyubiko: A Fun and Adventurous Slot Game 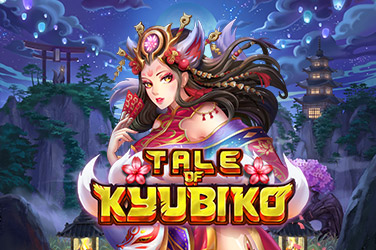 The mythology and folklore of East Asia serves as the inspiration for Tale of Kyubiko. Players will explore a world lit by lanterns and come face to face with enchanting beings and animals from the realm of Japanese mythology. These characters, which are drawn in an anime style, will lend a hand to players in their pursuit of golden coins.

Most players are going to have a good time exploring this fantastical location, but those players who adore slot machines with a Japanese theme and fantasy might enjoy this game the most.

String tones and flutes provide a soothing accompaniment to the background music. The music evokes a calm, meditative sense of spirituality that works really well with the theme. When someone is victorious, a gong is rung, which lends an air of majesty to the occasion.

The animation has a professional look and maintains a colorful aesthetic throughout. The symbols feature a kind-hearted monkey and a bird, both of which are decked out in the conventional garb of East Asian cultures. There are also lanterns that emit a gentle glow and are subtly printed with card suits.

The nine-tailed fox spirit, who floats in her reel decorated with red ornaments, is one of the most beautiful symbols in the game. She is also one of the most valuable symbols. Her snowy coat almost appears to be glowing, and the adorable look in her big eyes makes her impossible to resist.

The other icon that steals the show is a fantastical fox girl who possesses characteristics of both humans and animals. She is dressed to the nines in a glamorous ensemble and flashes a sly smile at the player.

In addition, there is a fox mask on the reels that is adorned with flowers and has a perplexed look on its face. The mask is encircled by shimmers, which give the impression that it is more than just a decoration.

This game exudes an ethereal air thanks to the cohesive combination of its music and animation. It has three reels, three rows, and a total of five win lines.

The gameplay is fluid and engaging, which will keep most players interested. The Wild symbol can be used in place of any other symbol. The Inari Stacked Wild accomplishes the same goal while also incorporating a few new features.

If it lands in any position at all, the Inari Stacked Wild has the potential to expand and cover the entirety of an entire reel.

When a player achieves victory with an Inary Stacked Wild, the Inari’s Dance feature is activated. These wins cause a re-spin to occur, during which the multiplier can increase as high as x25. Each time the reels are re-spun, the Inari Stacked Wild will relocate to a different reel at random.

This game has a return to player rate of 96.2 per cent, which is slightly higher than average. The betting options range from a minimum of 0.10 pounds per spin to a maximum of one hundred pounds per spin.

Plus, with Las Vegas Casino, you can enjoy thrilling bonus rounds that will help you rack up some serious winnings. Moreover, if slot games aren’t your thing, and you’d prefer live blackjack games, poker games, and more, we have those on our site as well.

So what are you waiting for? Start playing Tale of Kyubiko today!