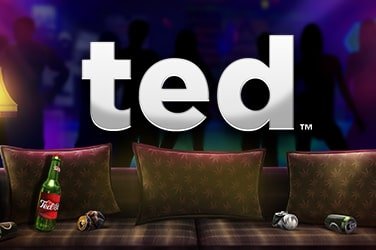 Slot games that have a movie tie-in are more popular than ever right now, and one of the most recent entrants to this movie theme is the Ted slot from Blueprint Gaming. Based on the films of the same name, Ted features the cuddly protagonist with the caustic attitude and ready wit. If you have not watched the movies yet, then you are missing out on a treat, but if you have, then you will love this slots game even more.

The layout of the video slot game features the eponymous Ted’s apartment in the background with the couch to the forefront, with the Ted character himself sitting at the bottom of the screen.

Ted’s slot base symbols are represented by the traditional playing card symbols Jack to Ace, but after that, you will find a six-pack of cola bottles, an attractive lady and the angry duck, with the highest scoring symbol being the Ted logo, which also acts as the wild symbol.

Although light on music, there are plenty of Ted soundbites from the original movie to listen out for when you achieve a win.

Blueprint Gaming has also done a fine job of getting this slot game ready for play on mobile devices, with the game automatically adjusting the size of the screen you are using, which makes playing it on the go so much easier.

The Return to Player (RTP) for this slot game is set at 95.8%, which is just below the high end of average of 94 to 96% for this type of game, but the opportunity to win the 500x jackpot on the base game is a major plus point.

However, on Ted’s slot game you can start receiving payouts for landing just two wild symbols in a payline, which will present you with a win 2x your stake. Land five Ted or wild symbols in a row, and you will receive the jackpot prize which will give you 500x your unit stake. This means a jackpot win when you have bet the maximum of $/€/£500 will give you a return of an impressive $/€/£250,000, whereas the minimum bet of $/€/£0.20 would see you win $/€/£100.

Landing three or more of the Thunder Buddy Bonus symbols will launch one of the slot’s bonus feature rounds, which include Ted free spins, Ted casino cash prizes, multipliers and Ted casino game wilds. Plus, it doesn’t matter which bonus feature you get, you will always get the chance to win the jackpot of 500x your unit stake.

Although this game is undoubtedly aimed at those people who have watched the Ted movies, this game is suitable for everyone. The chance to win the jackpot on the base game and the amount of bonus features Blueprint Gaming have included means that this game should appeal to casual players and high rollers alike.

Visit Las Vegas Casino’s Slots page if you’re looking for the thrill of the glitz inherent to land based casinos. We guarantee you’ll have the ultimate gambling experience on your mobile.