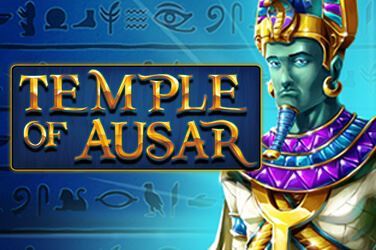 With a return to player (RTP) rate of 95.43%, the Egyptian adventure Las Vegas Casino players go on with Eyecon’s Temple of Ausar slot game can be truly rewarding, especially with the free spins that can be won.

Eyecon have gone down the traditional route that many other slot game developers have when it comes down to Egyptian themes, as they have emblazoned the playing grid with a gold trim that is befitting of the historic period.
They have also provided a background that consists of a number of hieroglyphics set on a blue-coloured wall that can be assumed to be inside the Temple of Ausar.

In paytable icons available in Temple of Ausar online slot game come with a number of vbrant colours, as the traditional playing card values – 9, 10, J, Q, K and A – all feature a different colour, whilst Egyptian symbols make up the more valuable icons available to collect when spinning the reels. These icons include items such as the crook and flail, the cobra, the eye of Horus, a scarab beetle and the Egyptian god, Ausar himself.

Furthermore, in Temple of Ausar, the goddess, Isis, also features but she is a special symbol.

This Temple of Ausar slot game has a playing grid that features 5 reels and 3 rows with a total of 25 available paylines in which winning combinations can be formed from left to right. These paylines are adjustable, though, so as few as 1 or as many as 25 can be used.

There are a number of customisable actions available to Temple of Ausar players to try and further enhance their gameplay experiences below the grid, such as the online slot game’s rules, the bet amounts and the autospin options.

Temple of Ausar players who choose to go on this Egyptian adventure that Eyecon have developed will find that there are two special game bonus features available to them to try and further their winnings.

The first Temple of Ausar bonus feature comes via the scatter icon, which is the goddess Isis. If she appears on the playing grid in 3 or more positions, then players will be rewarded with 15 free spins and a multiplier of 3x the amount when a win is formed throughout the duration of those spins. The free spins game can continuously be re-triggered, as well.

The other option players have to boost their winnings is via the ‘Gamble’ feature that can be found in many of Eyecon’s titles. Players who manage to form a winning combination and receive a payout in this Temple of Ausar slot game are able to try and improve it by gambling on the outcome of the next card that is drawn. If they correctly predict the next colour in the deck, then they will double their money. But, if they make an incorrect prediction, they will lose all the money earned on that spin.

As mentioned, this Temple of Ausar online slot game features a return to player (RTP) rate of 95.43%, therefore allowing players to have a solid chance of seeing a return on the money they play with.

Speaking of money, Temple of Ausar players are able to place wagers from as low as €/£/$0.01, or as high as €/£/$12.50 when all paylines have been activated. The choice is entirely up to the player.

There have been a number of Egyptian themed slot games made available in the past, but it could be argued that none are as simple to play as Eyecon’s Temple of Ausar title.

This online slot game comes equipped with an excellent free spins feature that can continue to be triggered, whilst the potential to play casually with low wagering amounts will suit many at Las Vegas Casino, including those that like to play with bigger amounts.