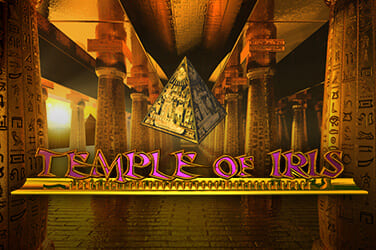 Free spins, instant prizes and up to 300x the bet are all possible in this Temple of Iris 2 slot game!

A picturesque setting has been provided in Eyecon’s Temple of Iris 2 slot game as the developer has managed to use some rather exceptional visuals and graphics.

The game is played out with a stereotypical background that features pyramids, camels with the sun seemingly setting in the distance as a vibrant colour scheme is used.

In regards to the symbols available on the paytable of this game, the standard royal playing card icons from 9 through to A are available in various colours, whilst these are then followed by more traditional Ancient Egyptian icons. These include the Ankh, Bastet, Cobra, Eye of Horus, Scarab and the Priestess, who is the most rewarding.

This Temple of Iris 2 video slot is played on a playing grid that follows a rather traditional and familiar set-up, with 5 reels and 3 rows having been made available for the icons to appear.

A total of 25 paylines are possible to play with, however Las Vegas Casino players are able to adjust their betting options accordingly and play with as many or as few as they wish.

A variety of different symbols are available in this Eyecon title that will allow bettors to be able to trigger some top Temple of Iris 2 bonus features.

The first that may be discovered is the Priestess icon as this is also the game’s wild. Players who land this symbol will see that their wins are doubled when it is used to complete winning sequences where possible via a method of substitution.

Players may notice that a golden pyramid icon has the ability to land on the reels, as well. This is important as it can trigger the free spins game that is possible to play. Furthermore, there are win rewards attached to the number of scatters that appear: 1x, 5x, 15x, or 300x for those that land between 2 and 5 anywhere on the grid on a single spin.

As mentioned, this icon has the power to launch the free spins game, although a minimum of three will need to appear. Those that achieve this will win 15 free spins that can be retriggered when three more scatters appear during the feature.

The last of the Temple of Iris 2 bonus features available is the Instant Prize game and this can happen during normal gameplay. Players may notice that a symbol may appear with a glowing gold background and if it appears on reels 1 and 5 on a single spin, a prize of either 2x, 3x, 5x, 10x, 15x, 20x, 25x or 30x the bet can be awarded. Furthermore, the symbols landing on reels 1 and 5 do not need to be identical!

The return to player rate for this Temple of Iris 2 slot game from Eyecon is 95.43% and comes with a medium volatility level.

Las Vegas Casino players can place a minimum bet of €/£/$0.01 per spin per line that they have active with this game, whilst a maximum bet of €/£/$12.50 is possible when each line has been made active and at the biggest bet value.

If the impressive visuals provided by Eyecon were not enough, then the bonus features available will make this Temple of Iris 2 slot game too hard not to play! Each of these will provide bettors the opportunity to win some serious cash and become as wealthy as the Egyptians were back in the era.

Play more slot games like Temple of Iris 2 at Las Vegas Casino now! Have some fun and may luck be with you.