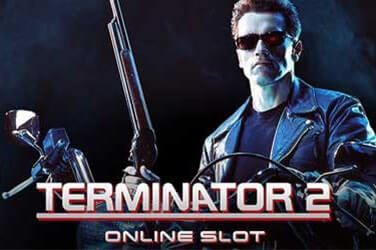 An RTP rate of 96.62% and free spins will make bettors want to hear the Terminator scream “I’ll be back!” in this Terminator 2 slot game by Microgaming!

The game features some of the best scenes from the movie, whilst also providing brilliant animations and an impressive soundtrack that helps to immerse players into the game. The playing grid is also provided with a selection of robotic wires and electronics, thus further providing a great experience. The game’s background changes in the ‘free spins’ round.

The game’s paytable also features a number of icons that can be associated with the theme as well. Although they start off with the traditional playing card suits – hearts, clubs, diamonds and spades – these are then followed up by the full robot version of the Terminator (T-800), Sarah Connor and the bad guy, T-1000. John Connor also appears, as does the humanoid version of the Terminator.

The slot game’s wild is represented by the T2 logo, whilst the scatter is shown as a scatter icon.

Terminator 2 slot game follows a rather standard layout in regards to the playing grid as there are 5 reels and 3 rows in which the game’s icons can appear and fall.

There are also a total of 243 ways to win available but this can be increased to 1,024 ways to win, which means players have a great chance of forming a winning combination on one and receiving a reward when possible.

One of the top Terminator 2 bonus features is the ‘T-800 Vision’ mode. This can be triggered after any spin that does not win and will happen randomly. When it happens, just 1 scatter will be needed to trigger the ‘Free Spins’ round. During this game, any appearance of a character will provide an additional reward.

The non-T-800 mode version requires 3 scatters to land. The screen during the mode will turn red and make players feel they are looking at the playing grid through their eyes. The ‘Free Spins’ round is the reason why there are so many different ways to win available as well. Players will be given a total of 10 free spins when they trigger the game and the T-1000 icon can transform into any other character.

If players are lucky enough to see flames around their 10 free spins, they will have triggered the “Hot Mode” game which will provide enhanced reels to achieve bigger wins. This bonus feature is rather rare, though.

With a return to player rate of 96.62%, Las Vegas Casino bettors will find that this video slot has a medium to high level of variance, as well.

€/£/$0.01 is required per spin as a minimum bet, although players will find that they are able to play with a maximum bet of €/£/$243 possible on each spin made.

Maybe you will be shouting “I’ll be back!” after playing this Terminator 2 online slot game, as it will provide you with a huge amount of action that can be potentially rewarding!

Play more slot games like Terminator 2 at Las Vegas Casino now! Have some fun and may luck be with you.