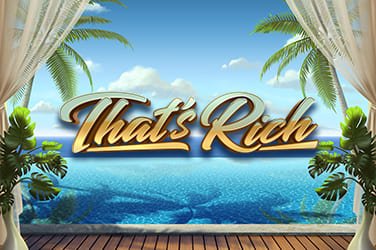 Las Vegas Casino players will find it’s time to enjoy a taste of the highlife with this That’s Rich slot game from Play’n GO, as it features a number of top bonus features and some rather nice cash prizes.

The graphics and visuals of this game have an impressive nature, although that is to be expected with the Play’n GO developers, as they continue to provide some rather top online game experiences.

That’s Rich video slot players will find that they are looking out on a luxurious setting with what looks to be an infinity pool area, as it features crystal blue water that is shown behind some clear curtains and features a number of green plants.

The icons on the paytable of this That’s Rich slot game are also expertly designed with a number of icons making players crave the highlife just a little bit more. Although they remain rather simple, there are some rather great animations on show throughout as well.

There are a number of different items available on the paytable of That’s Rich game, including the traditional playing card values, which are 10 J, Q, K and A. However, the more premium icons show things such as shoes and handbags, a mansion, a luxury yacht, a wad of cash and a magazine, which happens to be the most rewarding icon in this game when 5 of them appear on the reels.

Play’n GO have adopted a rather simple playing grid layout for this That’s Rich slot game with 5 reels and 3 rows being included, as well as just having 10 paylines available.

Las Vegas Casino players can customise a number of different options by using the traditional Play’n GO game panel that can be found right underneath the playing grid.

There are a number of bonus features in this That’s Rich slot game, which helps to make players feel as if they are being rewarded with some rather brilliant features. First is the expanding wild, which is represented by a rather cramped glamorous lady. She can expand or fill a whole reel on any spin, thus providing more opportunities to win.

There is also a win spins feature and this can be activated by landing three or more of the star trophy scatter icons. Online slot players who do this will be rewarded with 5 winning spins with at least one of those providing a winning combination.

If That’s Rich slot players are able to land more scatters during the round, they will then be awarded with 2 additional re-spins and up to a maximum of 20 can be won.

The Wild in this round will still remain active, as there is a progressive win multiplier that can be added to each wild symbol during the win spins round, with each increasing by one and going up to a maximum of 20. This means there is the potential to win a massive 10,000x the stake in That’s Rich casino game for anyone who has the luck that some of those needed in the highlife.

Las Vegas Casino slot lovers can place bets from as low as €/£/$0.10 or as high as €/£/$100 on each spin, thus providing players with a wide range of opportunities to bet.

That’s Rich slot game features a return to player (RTP) rate of 96.27%, which can be considered just above average, although the game’s volatility level is rather high, meaning wins can be rather infrequent but equally rewarding when they do land.

Play’n GO has provided a slot game that features a lot of potential in That’s Rich, as well as some great bonus features and one that should really appeal to Las Vegas Casino players, especially those who want to have a taste and experience of the high life.