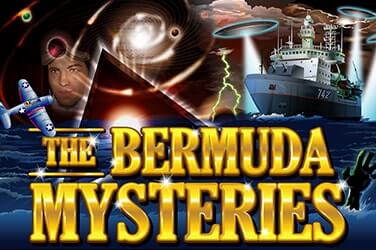 The mysterious Bermuda Triangle off the coast of Florida is a well-known source of speculation and conspiracy and it is surprising that we haven’t seen more slot games built on the theme of this unusual part of the world. Bermuda Mysteries slot , by Nextgen Gaming, is one of the few we’ve come across and has earned a place among the Las Vegas Casino top slots game collection.

Bermuda Mysteries slot game is a five-reel, three-row slot with 25 paylines and an RTP of 95.3%. This entertaining game can be played for stakes between 0.1 and 625, making it suitable for a wide range of bankrolls and it is considered to be a low volatility game.

In keeping with the theme of the slot game, the backdrop to the gameplay reels, which have a metallic feel is a rain-lashed, green-tinted perspective of the mysterious Bermuda Triangle. As well as the usual card values of nine up to Ace, there are some quirky symbols in use in this slot, including a ship’s radio, a fighter plane from World War 2 and a lifejacket. During the base gameplay, the pilot icon represents the Wild. This only features on the middle three reels, while there are also two different Scatter symbols: a map and a golden badge, both of which trigger additional games.

Free Spins are an important part of any online slots game and in Bermuda Mysteries slot , you can earn 12 Free Spins when you bring up three golden badge icons anywhere on the screen. During the respins, a radar symbol appears on the fifth reel and every time this symbol lands, the round multiplier will be boosted by x1. Although you can’t re-trigger more spins during this Free Spin feature, it is possible to activate the other feature, the Rescue Bonus.

This bonus is a mini-game that is launched in the main game or Free Spin bonus when you bring up three map symbols on the reels. You are instantly transported to a radar station and you then have to pick from the selection of locations on the map to find a prize. If you turn up a crashed plane or a wrecked ship, you can scoop a prize, but should you discover a Whirlpool, Wormhole, Freak Wave, Flying Saucer or Broken Compass, the feature will end.In Bermuda Mysteries online slot is also worth mentioning the Gamble feature. Every time you land a win, you will have the option of the Gamble, which involves trying to correctly guess the suit or colour of a sequence of cards. Each correct guess increases your win, up to a maximum of five, though this feature is really only for those who are prepared to play at the higher levels of volatility.

The Bermuda Mysteries slot does a solid job of creating an atmospheric game experience and has some interesting bonuses to retain the player’s interest, including the Rescue Bonus which brings a dash of originality to what is a solid base game.

At Las Vegas Casino our focus is clearly set to provide you the best slot games from the most sought-after game providers available.