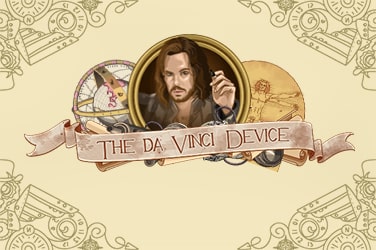 Free spins and win multipliers are all on offer to Las Vegas Casino players in this Da Vinci Device slot game, with each providing a good number of rewards!

The game some rather simple designs, yet they remain rather appealing for Las Vegas Casino players to enjoy when they spin the reels of this game, with the background featuring a nice colour.

The game has a number of classic icons available on its paytable, including the traditional royal playing card symbols, as well as some of his best-known inventions and works of art that have been produced by the legendary figure. These include the helicopter, the Mona Lisa and a self-portrait.

Landing five of the globe icons will provide players with the best rewards.

This Da Vinci Device online slot game features a traditional playing grid that consists of a total of 5 reels and 3 rows, with the potential to win from 243 different ways! The game is simple to play and enjoy, as just 3 or more identical and adjacent symbols are required to trigger a payout.

Whilst 1×2 Gaming has kept things rather simple with their Da Vinci slot game, the developers have also kept simplicity the main aim of the game in regards to the bonus features that are on offer, although they can still prove to be highly lucrative for Las Vegas Casino players playing for real money.

The first of the special icons available in this title is the famous Vitruvian Man, as this icon is the game’s wild and can help to provide players with the potential of picking up wins when it can transform and replace other icons on the grid to help provide further winning combinations and sequences.

In addition, players will find 5 different scatter icons in this game, with each of them only being able to land on one reel each. Las Vegas Casino players who know anything about Da Vinci will quickly work out that these form a cryptex.

Players who land 3, 4 or 5 pieces of the cryptex on a single spin will be able to trigger the free spins game that is available in this Da Vinci Device slot game. Players who land 3 will receive a total of 8 free spins, whereas those who land 4 and 5 respectively will trigger 12 and 16 free spins!

In addition to the free spins, the bonus game will also see wins be rewarded with a specific win multiplier, with 2x, 3x and 4x multipliers being available with the 8, 12 and 16 free spins respectively!

Las Vegas Casino players can feel as though they will be in with a great chance of obtaining a number of wins when playing this Da Vinci Device slot game, as there is a return to player (RTP) rate of 96%.

The number of free spins, as well as the continued increasing multipliers, are a nice bonus feature in this game, with the Da Vinci Device providing players that play this game with a potentially truly rewarding experience.