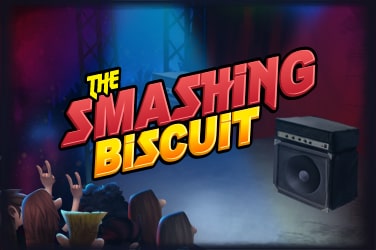 Las Vegas Casino players will be able to get rocking with this The Smashing Biscuit online slot game from Microgaming, as it will give them all the nostalgic vibes that they may have had whilst having the ability to take advantage of some brilliant free spins.

The Smashing Biscuit slot doesn’t actually feature any of the snacks that one would immediately suspect. However, it features a rock band that would be similar to one that a teenager may have perhaps been involved in at some point.

Microgaming have provided some rather fun and light-hearted visuals with this online slot, as players will find that each of the symbols provided have been used in a cartoonistic way.

When taking a look at the paytable of this The Smashing Biscuit slot, players will find that there are a number of symbols that fit the theme being provided. These symbols include the traditional royal playing card icons, however, these have been converted to look like guitars in a nice effect, whilst there appears to be a dad, as well as three different rockers. One is called Soggy Biscuit; the blue guy is Crunchy Biscuit, whilst the red one is Tiny Biscuit; who pays out the biggest rewards when 5 appear.

This slot game is played over a grid consists of5 reels and 3 rows, and comes equipped with a total of 20 fixed paylines that pay from left to right.

There is the ability to customise the gameplay experience, as well as there are a number of buttons available on the right hand side of the grid, including the auto spins, and the ability to adjust the bet being placed.

One of the special bonus features in this The Smashing Biscuit video slot is the free spins game called the ‘Random Dad’ bonus. When he wanders into the garage and adjusts the band’s volume, this can cause the multiplier to increase up to 11x for wins that have made on that spin.

The main bonus feature of this video slot is the ‘Battle of the Bands’ free spins round and this can be triggered when players land three scatters. During this game, landing a win with any of the band members will turn them wild. This game will be played on a smaller set of reels where only three of a kind or four of a kind combinations can be made.

The return to player (RTP) rate of The Smashing Biscuit online slot stands at 96.08% and it comes with a medium volatility level, therefore, many players will feel they are able to win generous prizes rather frequently.

Microgaming’s The Smashing Biscuit online slot game is a top example of a fun-filled game from the developer as it is a rather quirky and unique title compared to many other slots around.

The game features some rather fun visuals as well as some top bonus features that can help to provide players with some top rewards.