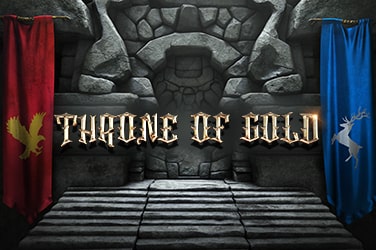 Free spins, expanded icons and excellent visuals all help Las Vegas Casino players enjoy the fantasy and adventure that Genii has provided with this Throne of Gold online videoslot!

Throne of Gold slot game comes with some incredible visuals and graphics, with Las Vegas Casino players likely to be left fully immersed in the theme that has been adopted.

Perhaps something out of a classic history fantasy story, players will find that the game’s background utilises a huge castle that has been expertly designed, whilst there appears to be a dragon behind the playing grid as a wing appears on each of the sides.

The visuals are truly of epic proportions and these carry on when it comes to the symbols used on the game’s paytable.

The icons available include the traditional royal playing card icons, which have been expertly designed with colourful dragon scale, and these are then followed by items such as various creatures, jewellery, buildings and the dragon, who is the most valuable in this game.

Genii have adopted a traditional playing grid for their Throne of Gold online video slot game as players will find it is played across 5 reels and 3 rows, whilst there are a total of 20 paylines that are available to form and build winning combinations on.

These paylines are adjustable, whilst there are also a number of other betting options and features that can be adjusted to provide a better and potentially enhanced gaming experience for those that are more advanced in playing online slot games.

There are a couple of special icons available in this Throne of Gold online slot game that players should be aware of when they play this game, as they could prove beneficial to those that want to win the biggest rewards on offer!

The main Throne of Gold bonus feature available is the free spins game and this can be activated when players land the scatter icon in three or more positions on the playing grid. This scatter is the throne icon and three of these will provide 7 free spins. Those that land four and five of these will win 14 and 20 free spins to play with!

Furthermore, this free spins game can be retriggered when an additional three or more scatters appear on the grid, whilst those who are able to form any winning combinations during this bonus feature will find that their prize has been doubled!

Players are able to play this game with a minimum bet of €/£/$0.01 per spin due to the adjustable paylines that are available, although the maximum bet per spin is €/£/$50.

The return to player (RTP) rate for this Throne of Gold online videoslot is 96.05%.

Undoubtedly, the Throne of Gold bonus features available in this online slot game from Genii will be one of the biggest reasons why players are able to churn out some top rewards and prizes when playing this game.

The free spins game that can be retriggered is a great bonus, as is the expanded symbols that are available on the playing grid. Those looking for an epic story and adventure will love this Throne of Gold slot game.