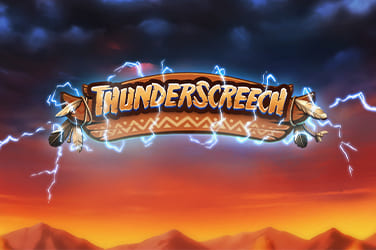 A Native American theme has been the clear source of inspiration for Play’n GO with this Thunder Screech slot game, as the game’s visuals clearly represent it in a perfect way.

Players who play this game will be greeted with a brilliantly designed background that features a number of excellent graphics and animations, including an eagle that is flying across the screen at periods.

Furthermore, the symbols have all been designed brilliantly with many of them appearing to have been carved out of wood, whilst also featuring some glistening animation animations.

The symbols include things such as the traditional royal playing card icons, whilst there are also a number of Native American inspired icons as well. These include creatures that can be found within the region such as beavers, otters, badgers, wolves, and a raven.

Additionally, the special icons in this Thunder Screech slot game can be associated with the theme with things such as totems, dreamcatchers and birds of prey all available.

Play’n GO have adopted a traditional playing grid for this Thunder Screech online slot game, with a total of 5 reels and 3 rows available, as well as 10 paylines.

They have also implemented their traditional game panel at the bottom of the screen, where players are able to adjust their bet and take advantage of the autoplay feature.

Play’n GO are no strangers to packing their online slot games with bonus features, so it is no surprise that this Thunder Screech title has a number available to Las Vegas Casino players who give the reels a spin!

There are two random features that can be triggered, with the ‘Call’ feature adding anywhere between 5 and 9 wilds to the reels. This is incredibly helpful as the main wild of the game can only appear on the middle three reels, therefore additional wins can be created when they are added to the grid.

The ‘Strike’ feature will see all wilds that are on the reels be turned into ‘Thunder Wilds’. These icons will remain locked on the grid and will activate respins that will see the multiplier increase by 1 on each occasion.

The free spins game will be triggered when players land 3 dreamcatcher icons on the reels, with all regular wilds being instantly transformed into Thunder Wilds for the duration of the bonus game. At least one of them will appear on each turn!

Furthermore, the return to player (RTP) rate of this online slot game stands at 96.20% and comes equipped with a medium volatility level.

Thunder Screech online video slot game has the potential to provide players with the ability to win a number of prizes via the special bonus features that they incorporate. The free spins game is attractive, although the random features can be the most lucrative, especially as they help to provide additional wilds!