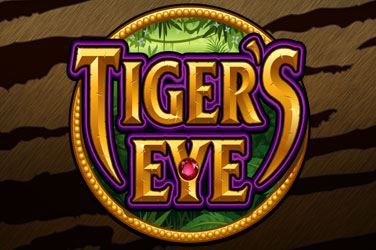 Welcome to the jungle for fun and games with Microgaming’s Tiger’s Eye slot game. This jungle-themed atmospheric game takes the user into the heart of the humid Asian jungle, which is the home of the majestic tiger, and it comes with free spins, multipliers, and stacked wilds galore.

The game is set to a lush green rain forest environment, with the slot’s five-reel set up across three rows being framed by a tiger-striped border in orange and black, and they play from left to right apart from the scatter. The game offers up to 40 pay lines, and these can be set prior to pressing the spin button; and there are several coin sizes to choose from also, ranging from $/€/£0.01 to $/€/£0.50 per line. The Return to Player ratio for this particular game from the Microgaming stable is a not too shabby 96.26%.

The base symbols of Tiger’s Eye slot game are the standard playing card icons ranging from 10 to Ace, with three 10 symbols offering five coins, four paying 12 coins, and five giving you 150 coins, whereas the Ace offers 15 coins for three identical symbols, 40 for four, and 150 for five.

The more valuable symbols of the Tiger’s Eye slot game are represented by the kind of wildlife you would expect to find deep in the Asian jungle, including a monkey, a peacock, and a deer. Although, the most valuable is the Tiger’s Eye symbol, with landing five of them giving you a return of 1,000 coins.

The golden tiger statue icon is the scatter symbol, and it has two roles in this game. The first is that it launches the free spins feature, and the second is that it offers its own pay-out with as much as 200 times the unit stake being returned whenever three or more of them appear anywhere on the screen.

This is a fast, affordable, and easy-to-play online slot game that should appeal to those new gamblers to online slot gaming as there are no complicated side games or bonus features. Plus, even the lowest staked bet can still bring in big wins, especially on the free spins where the final spin could see a 10x multiplier added.

Plus, Tiger’s Eye slot game has been optimised by Microgaming to run on various types of devices, including mobile devices such as tablets and smartphones, meaning it is just as much fun to play on the move as it is at home.

The adventurous mood of a jungle adventure to the glamour of our online casino game rooms, if you’re looking for a top gaming experience, please check Las Vegas Casino excellent selection of slot games.