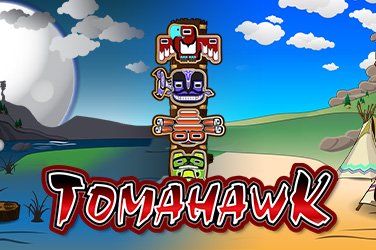 Released in 2014, Tomahawk is a cute cartoon video slot with a classic Native American theme created by Genii online casino game developers. The star of the online game is a young brave, and symbols on the reels include Native American style engravings of animals such as dragonflies and eagles. It’s a bright, appealing slot game which looks a little lighter than many similarly themed online video slots, which is a great start. Next, let’s see whether it’s any fun to play.

As is usually the case, Tomahawk also features a couple of bonuses that are worth playing for. Look out for the Tomahawk game Scatter symbol landing on the reels; not only does this symbol pay an instant win when two or more land on the reels, but three or more Scatters trigger the slot’s Free Spins bonus round.

The slot game Free Spins round offers between five and 15 free spins, with either a 2x or a 3x multiplier in play during the round. This makes Tomahawk’s Free Spins round particularly interesting if players can land three Scatters because those triple wins are a game-changer.

There’s also a Totem Builder bonus round in this Geniii’s title, which is essentially a pick and click bonus game in which players select the sections of a totem pole to win prizes, which will be added together at the end of the round for a winning total. Between this game and Free Spins, there’s a little something for every player in Tomahawk.

Tomahawk Slot Game Has Return To Player Of 94%

Tomahawk, unfortunately, offers an average return to player of 94%, which means that for every 100 coins spent on the reels, players can expect to win back around 94 coins. This is a little low compared to many other modern video slots, which means you’ve got to really like Tomahawk to play it for more than just a few games.

Tomahawk is an interesting slot which does something a little different with the Native American theme, brightening up the reels with cute cartoon symbols and characters. It’s also got two fantastic bonus rounds, so whether you prefer playing free spins or pick and click features, you’ll enjoy Tomahawk. However, as is quite often the case with Genii slots, this online casino game is let down by its lower than average return to player. The Tomahawk video slot is definitely worth a few spins, however, don’t expect much more than that from it.

If you enjoyed playing the Tomahawk slot game and you’re a demanding online casino player then you might want to check our top selection of popular slot games at Las Vegas Casino.