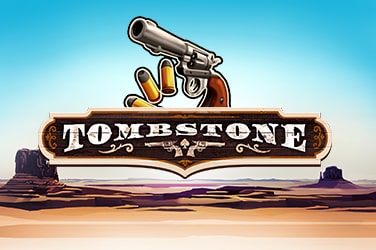 108 ways to win on a grid that is laid out as a 2-3-3-3-2 formation, as well as three different spin games makes this Tombstone slot game one not to miss!

Wild Western themes are always a hit for slot game players so Las Vegas Casino bettors will love what NoLimit City has done with this title.

The setting for the Tombstone slot game has been created perfectly as players will instantly feel as though they are immersed in the theme as they will be met with a grid that is situated in a typical wooden building reminiscent of the time period.

The icons on the paytable are also reminiscent of the era as there is a range of different items that will typically be found within the genre. There are the traditional standard playing card icons which are then followed by a gun, horseshoes, a sack of cash, gold bars and a stick of dynamite.

This Tombstone online slot game follows a slightly different approach when it comes to the playing grid-style compared to the standard format that can be found.

One of the main Tombstone bonus features available is via the use of the game’s wilds, as there are three different icons that can be found. Each of these represents an outlaw in the form of Skinny Joe, El Gordo and Edda Star. The icons can appear on reels 2, 3 and 4 and will only need to land partially in order to expand and fill the entire reel.

If the outlaw icon lands covering the entire reel without having to be moved, it will provide a 1x multiplier, whilst those that need to be pushed by one position will see a 2x multiplier awarded, whereas those that require two positions in order to expand, players will receive a 3x win multiplier.

The next Tombstone bonus feature that is available are the three different free spins games that can be found. These games are:

Players are able to trigger three Justice Spins when they land a sheriff badge and a marshal badge on reels one and five on the same spin. Any wild that appears will then remain sticky and last the duration of the bonus.

A total of 10 Gunslinger Spins are on offer if players are able to land three scatter icons. This is the most available as these icons only appear on reels 2, 3, and 4. Outlaws will remain sticky if they appear and will provide unlimited multipliers, whilst additional free spins will be awarded if more scatters appear during the bonus, with two of them providing an additional three spins!

The Bounty Spins is the best Tombstone bonus feature, though, but players will need to work hard to achieve it. They will need a combination of both of the outcomes mentioned above to happen, but if they do, they will be awarded with a mixture from the two other free spin games as well as a minimum of 12 spins!

The return to player (RTP) rate for this Tombstone online video slot game is 96.18%.

€/£/$0.10 is possible as a minimum bet for this game, although NoLimit City has allowed a maximum bet of €/£/$50 per spin should Las Vegas Casino players feel they want to bet bigger amounts on the title.

Yee-haw! Bettors at Las Vegas Casino will be hoping to shout that out when the play this game but there is certainly the potential to do so when they trigger the bonus rounds!

Free spins and an RTP rate of 96.18% will have players delighted that they took to the Wild West in this Tombstone slot game!