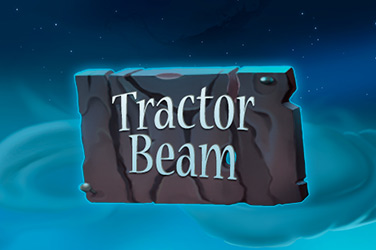 A potential of 12 free spins and cloned stacked icons are just a few of the bonuses available in this Tractor Beam slot game that has an RTP rate of 96.01%!

NoLimit City have decided to explore a rather weird and whacky theme with their Tractor Beam online video slot game, although it is one that actually works rather well.

Set on a farm, the setting provided gives off the impression that things are about to get weird as aliens appear ready to abduct the cartoon animals that have been provided on the playing grid.

In addition to these icons, others to appear on the paytable include the standard royal playing card values on pieces of scattered wood, whilst there are a number of special icons that can trigger Tractor Beam bonus features!

This Tractor Beam slot game is simple to enjoy as the developer has provided bettors with a playing grid that consists of a 5×3 layout; a pretty standard layout across the industry.

In addition, there are a total of 20 paylines, which are all fixed with each spin that is taken at Las Vegas Casino. However, there are a number of other customisable options and functions available to utilise.

NoLimit City have provided a range of different Tractor Beam bonus features within this game, as highlighted by the special icons that can be found on the grid.

The game’s wild is the hazard sign and this has the ability to substitute for all regular paying icons on the paytable, whilst it will never be beamed up during the game.

One of the first Tractor Beam bonus features that may be triggered is the ‘Clone Attack’ game which will see one of the farm animals available be cloned and make them appear in stacks on up to four of the reels.

Players can also trigger the ‘Beam ‘Em’ bonus game which will see all of the low-value icons and scatters be removed, thus allowing bettors to only form winning combinations with the symbols that are the most rewarding.

The last of the Tractor Beam bonus features available in this title is the ‘Abduction Spins’ bonus which will be activated when players land three or more of the scatter icons on the reels. Here, players will receive either 7, 9 or 12 free spins depending on the amount of scatters that they land.

In addition, this bonus round will also see symbols be removed from the grid when they are involved in a win, thus leaving potentially just wilds on the reels which would enable huge wins!

The return to player (RTP) rate has been set at 96.01% and features a level of high volatility.

NoLimit City’s wacky team of developers certainly know how to combine the odd with the wonderful when they create their titles and this Tractor Beam slot game is certainly one of them.

The game features cool special features and is available to players of all budget requirements, thus making it one that needs to be experienced!