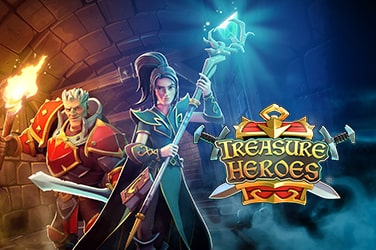 With 10 free spins available to obtain in this Treasure Heroes online slot game, Las Vegas Casino players will be enjoying the fixed wilds and cluster pays mechanism that has been adopted in this game even more!

Microgaming and Rabcat have teamed up to provide players with a mediaeval battle theme that combines a magical twist with it.

In this Treasure Heroes online slot game, players will find that there are a number of vibrant and expertly designed symbols available within the background of the game, showing just how good the visuals can be.

When exploring the Treasure Heroes paytable, players will be able to find a number of different symbols that are all closely represented within the theme, including things such as Vikings and Magicians, as well as other certain items.

This Treasure Heroes online slot game features a cluster pays mechanism with the playing grid consisting of 5 reels by 5 rows and a total of just 5 paylines. However, winning combinations will be formed when players can land matching symbols in groups of 6 or more.

Treasure Heroes slot game features a moving wall feature that can be triggered whenever a winning combination has been formed.

Players will notice that reels one, three and five will move over to spaces that have been formed. Once this happens, if any new wins are formed, then they will be paid out.

Players who are able to land just two scatters will then also be able to trigger 10 free spins, although the moving wall feature will not be active.

However, the two character icons that can appear will turn into fixed wilds that stay in place for the duration of the bonus game.

The return to player (RTP) rate of this Treasure Heroes slot game stands at 96.12% and consists of a medium volatility level, which means both large and small wins can appear rather frequently.

Players who play this Treasure Heroes online slot game from Microgaming and Rabcat will certainly feel as though they have struck rich when they are able to trigger the special bonus features that are available in this game!

Sticky wilds and free spins are an excellent addition and a sure-fire way in which players will be able to churn out some top treasures in this game, whilst the RTP rate of 96.12% and the medium volatility level certainly help to make those dreams and aspirations a reality when spinning the reels over a period of time!