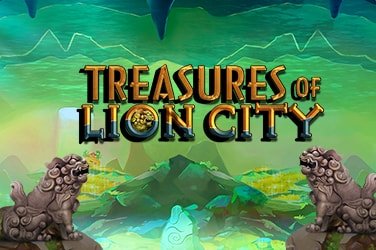 One of the most popular online slot themes around is Oriental/Asian. There have been many titles based on this part of the world in the past, with Sakura Fortune being a good example. This has not put the studio behind Treasures of Lion City slot game off though. This online casino slot game injects new life into proceedings by mixing the Oriental theme with an adventurous, aquatic one. The result of Treasures of Lion City slot game is an interesting title which has an immersive storyline to keep UK players entertained.

The innovation shown in making this slot is no surprise when you see that Microgaming are behind it, in conjunction with Pulse 8 studios. Operating since 1994, this Isle of Man game provider are well known for being true pioneers within online gaming. They employ a vast array of talented staff at their HQ in the town of Douglas and have won awards in the past for their stunning slot games. But what does this title have to tempt UK players with?

The basic story of this slot involves players donning their scuba gear and heading under the ocean waves to explore the lost Chinese metropolis of Lion City. Visually, Treasures of Lion City video slot is a very good looking game and the quality of the graphics is sure to keep players coming back for more. Oriental Lions and underwater caves form the game’s backdrop and this is very effective in taking you to the heart of the story.

The base game of Treasures of Lion City slot comes with a 3 row, 5 reel and 25 payline design which is nice and simple to pick up. You will also find the awesome Rolling Reels feature of the Treasures of Lion City’s base game. This is something you might know from other Microgaming slots. If you have not come across it before, it is easy to grasp and can net you big wins.

Once a winning combo is formed, the winning tiles disappear and new symbols fall into place. If you win again, this process carries on. There is also a max payout of 2,600 times your stake in Treasures of Lion City slot game which is not to be sniffed at. Available on mobile and desktop, the RTP of 94.20% is below average for modern slots though and this does work against it somewhat.

The first thing you will notice about this video slot is that there are no Scatter symbols in it. This is a little odd as most other online video slots around now include this feature. There is a Wild symbol though which is the Golden Lion. These replace other symbols to form winning combinations, as you would expect.

An innovative touch that Microgaming have included is based around Wilds too. On each 5th, 3rd and 1st consecutive win in the base game of Treasures of Lion City slot, certain symbols like a chest or a potion are transformed into Wilds. If you keep this up, a win multiplier of up to 27 times is brought into play. This can naturally see larger payouts and bigger wins.

Microgaming video slots are known for looking great, having some interesting bonus features and being awesome to play on mobile. The good news for UK slots fans is that the Treasures of Lion City slot game delivers on all counts in this regard. You cannot ignore that low RTP figure of the game though and it could really put off some players.

That would be a shame though as the immersive story and fun gameplay of Treasures of Lion City do make this a decent title to try. If you fancy giving this or other top Microgaming slots a go, why not sign up with LasVegasCasino today?

Play the best mobile slots at Las Vegas Casino and get ready for the ultimate online casino experience. Rate and play the best slot games online like Treasures of Lion City.