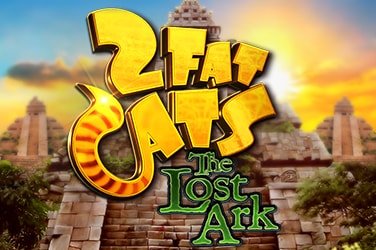 This is a great example of a title that takes a slightly offbeat theme but manages to create a wonderful experience. Inspired Gaming have been truly inspired in creating this Two Fat Cats game, with interesting visuals and some exciting bonuses for players to stay entertained.

The visuals are quite wacky and cartoony, with two cats being the main characters, acting as treasure hunters looking for some bounty amidst ancient ruins. There is a very distinct Indiana Jones vibe coming from the Two Fat Cats video slot game visuals, with the cats also dressed in a similar manner to the famous movie character.

This sense continues when you see the symbols on the slot reels – there are hats, golden skulls, bejewelled cups and bags of precious stones showing up on the Two Fat Cats game’s grid, and these are all the higher-value symbols. The standard card symbols, in bright colours, are the low-value icons.

The overall visuals and animations of Two Fat Cats slot game are excellent, which really helps to sell the theme and ambience. There is a golden ark which sits below the reels, which can occasionally have an influence on the game as well, while there is a fun visual of the two cats, Chip and Ace, running from a giant stone ball down a hallway which plays when the game is loading.

This game has a slightly unusual setup, in that it has 5 reels but 4 rows. There are no fixed paylines, with 20 of them available for the player to activate or deactivate as per their choice.

In Two Fat Cats slot game, the usual wins are picked up when three or more symbols land on the slot reels, from left to right. However, the game logo is on the reels as the bonus symbol, and you only need to land two of them to receive a win.

The Two Fat Cats game’s wild can be regular or sticky. The regular wild will replace all other symbols on that reel to create winning combinations, while the sticky wild will, you guessed it, stay on the reels even after replacing the icons.

Randomly during the Two Fat Cats game, the ark at the bottom of the reels will open up, with scarab beetles being unleashed over the reels, which will turn symbols at random into the higher-paying ones, or even into the bonus symbol.

Landing three or more of the bonus symbols on the reels will activate the bonus game.

There are many possible bonus games. The first one will bring up a screen with three wooden chests, with the player needing to choose one to reveal his reward.

The other Two Fat Cats slot bonus modes are triggered through the scatter symbols in the base game. Both Chip and Ace have their own free spins. Chip’s feature will give the player 5 free spins, with a golden multiplier moving on the reels to double wins during this time. Ace’s free spins will also award 5 spins, where random wild symbols will land on the reels.

There is another free spins game which will have both cats involved – with 5 free spins, with the winning symbols being sticky and therefore setting up the chance of bigger wins. There is a snake pit bonus as well, with Two Fat Cats slot players having to choose from various baskets to receive prizes.

The Golden Scratchpost game will see the player having to scratch to uncover rewards, while rocks fall down around them, eventually ending the game. Finally, the Scaredy Cat game has the Two Fat Cats player having to guide Chip and Ace over a series of trap doors, with a cash reward for every drop that is avoided.

Players can bet from 0.20 credits right up to 250 credits, with these being split across the paylines equally. There is also a Fortune Bet option, which increases your stake by 50%, but also doubles the size of the bonus symbol on the reels. The game’s RTP is a healthy 95%.

This slot is an excellent one by Inspired Gaming, with brilliant visuals, as well as exciting bonus games which offer players the chance to win big in multiple ways.

Two Fat Cats is a tiny part of Las Vegas Casino’s amazing slot games offer. Get immersed in this ultimate online casino gaming experience, whether you are at home or in the bus stop on your mobile device.